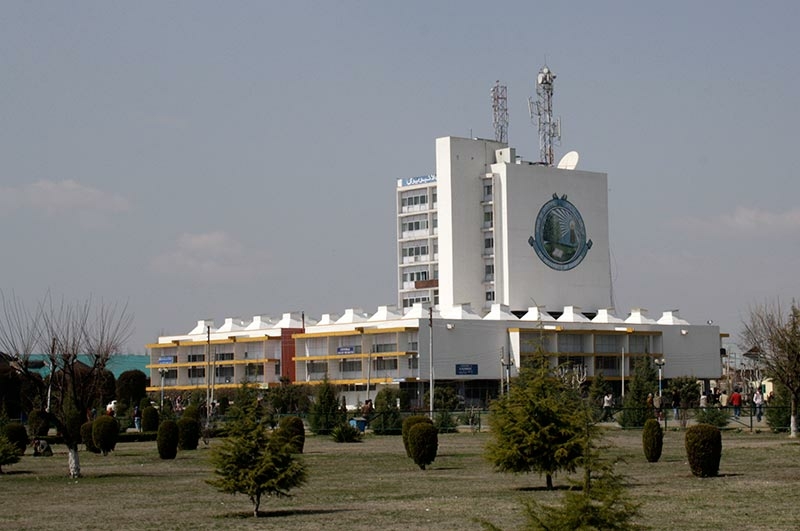 SRINAGAR, Apr 9: In a major achievement University of Kashmir has been listed among top 100 Universities in the country.
In the all India ranking for 2019, assessed by the Union Ministry of Human Resource Development, (MHRD) the University of Kashmir (KU) got the 53rd rank with a score of 44.19 points among the Indian Universities while as University of Jammu scored 74th rank with a score of 40.43 .
In the overall rankings where some 3500 institutions participated compared to 1500 last year , the University of Kashmir scored the 79th rank .
NIRF was approved by the MHRD and launched by Minister of Human Resource Development on September 29, 2015. This was the fourth edition of NIRF rankings.
The ranking of Indian Universities and other educational institutions in 2019 under Institutional Ranking Framework was displayed by President Ram Nath Kovind.
Pertinent to mention that the National Institutional Ranking Framework was instituted by MHRD in 2015 and the first rankings were announced in 2016. NIRF outlines a methodology to rank institutions across the country. The methodology is based on developing a set a metrics for ranking of academic institutions, based on the parameters agreed upon by a Core Committee. The parameters broadly cover `Teaching, Learning and Resources”, “Research and Professional Practices”, “Graduation Outcome”, “Outreach & Inclusivity” and “Perception”.
In yet another achievement University of Kashmir has scored 51st rank among the universities and higher education institutions assessed in the QS India University Rankings 2019.
According to the latest report of 2019 released by QS University of Kashmir is ranked at 51st position in the list which has been topped by IIT –Bombay. The Indian Institute of Science (IISc) in Bengaluru stands second .The IITs in Madras, Delhi, Kharagpur and Kanpur have bagged third, fourth, fifth and sixth respectively.
In QS rankings the University has scored 90.9 marks out of 100 in the staff with PhD- the indicator designed to identify the extent to which institutions are cultivating a highly-qualified faculty body. Based on the proportion of academic staff members with a PhD, this indicator aims to assess how successful universities have been in recruiting highly qualified faculty members.
In faculty /student ratio the University has scored 54.7 –this parameter reflects the number of students enrolled per full-time academic faculty member employed. The aim is to give an indication of commitment to teaching and student support. Calculated using data from Scopus in Papers /faculty parameter the University has scored 26.7 while as in Citations/ paper parameter the University has scored 38.8. Both these parameters have shown an upward trend given the fact that the H- index of KU was less than 10 in its last NAAC accreditation cycle which has now registered a quantum jump of 47 at present.
While terming it as “a positive development” at a time when the university is gearing up for NAAC visit for reaccreditation Vice Chancellor University of Kashmir Prof Talat Ahmad said “This is a very positive development given the fact that institutions/universities in and around this region which otherwise have been assessed and graded well by NAAC are far behind than us in the MHRD and QS ranking.” The ranking by the QS (Quacquarelli Symonds), a UK based company specialising in education, include public universities, private universities and higher education institutions or deemed universities.
Prof Talat also added “I congratulate both the teaching and non-teaching staff of our University and also our students and scholars and Team DIQA for this achievement. However, he said, that since we aspire to get recognized as an institution of excellence both at National and International level therefore we do not have to be complacent and work harder to score higher rankings next time as well as better grade in the upcoming NAAC reaccreditation.”
Registrar University of Kashmir Dr Nisar Ahmad Mir has also congratulated the University fraternity for achieving this milestone.