Joint Hurriyat calls for end to hostilities: ‘We regret every killing in Kashmir’ 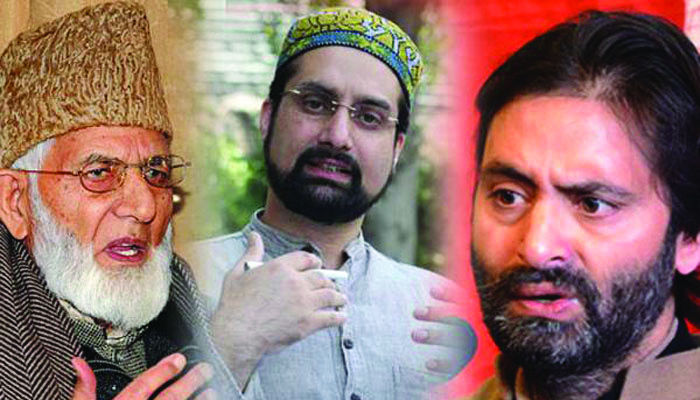 Srinagar, Feb 15: Reacting to Thursday’s militant attack at Lethpora, Pulwama in which 49 CRPF personnel were killed, Joint Hurriyat Leadership comprising Syed Ali Geelani, Mirwaiz Umar Farooq and Yasin Malik Friday said that people and leadership of Kashmir regret every killing that happens on its soil.
“As we witness killing of our loved ones our young, and shoulder their coffins each day, we can feel and understand the pain and sense of loss that the family and friends of those who are killed go through, not for a day or two when everyone is expressing grief and condolences to them, but the silent grief and loss that stays with them for a lifetime,” the leadership said in a statement.
They added that the delay in the resolution of the Kashmir dispute, the denial to engage with the sentiments and aspirations of the people of J&K and instead the “use of a muscular military approach to counter an essentially political and human problem, is wreaking havoc in Kashmir”.
“Militarization, CASOs, use of bullets and pellets, blowing-up homes, blinding and maiming, slapping PSAs as a means to crush legitimate political aspirations of a people has not only failed but worsened the situation,” they said.
Joint Hurriyat said that if this “dance of death has to stop, if hatred and revenge have to stop, if killing and counter-killings have to stop and if we really want peace in the region we have to put an end to hostilities.”
“And the most effective and civilized manner to do so, is to reach out and engage and listen to the concerns of all three stakeholders and address them in the spirit of humanity and justice. Resolve the Kashmir dispute for all times,” it said.
Joint Hurriyat also strongly condemned the incidents of arson in Jammu in Gujjar Nagar and elsewhere where some communal elements torched the vehicles of Kashmiris and injured many others.
“Right from 1947 communal forces active in Jammu who leave no stone unturned to attack and intimidate Muslims and Kashmiri people. It is the responsibility of the administration to ensure the safety and security of Muslims and Kashmiris and living there.