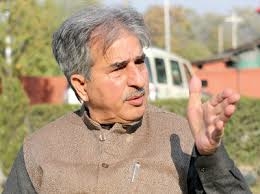 Jammu, Feb 8: Peoples Democratic Party (PDP) Vice President Mohammad Sartaj Madni has said that state of Jammu and Kashmir is proving to be the best beneficiary of Post- GST, Tax regime.
He said that government led by Mehbooba Mufti has handled the issue with utmost care and regard for state’s fiscal autonomy. He said specific economic considerations also are being duly taken into account with finance Minister getting vindicated on all commitments made by the government to business community and other stake holders.
Madni said that state government has retained all its authority bestowed in it by state’s constitution for tax assessment and tax administration. This should allay all apprehensions which were spread when state government decided to apply GST in the state.
Madni said not only has GoI respected the state government’s stand on constitutional position, it has also agreed to all the proposals regarding tax exemptions on Handi crafts and other such products and businesses. He said it is heartening to note that GoI has additionally agreed to State governments proposal for assessment under the 80:20 share for businesses over one and a half crore. This gives relief to huge section of society and will give push to business in a big way .
Madni said getting 80% businessmen with a turnout of over 1.20 Crores under state’s preview is a unique achievement as this has ended dual control. He expressed hope that state government, as it is equipped with business friendly Tax- regime , should be able to make Jammu and Kashmir a viable centre for vibrant economic activity it should also sail through in-taking indigenous products to National and International market with greater ease and flow.
Madni said the able Fiscal management has already benefitted service class in a big way, and now with the more rationalized measures and greater freedom every section of society will yield the dividends to become self lenient and affluent.