Is this the most beautiful natural cricket ground? Video of a match in Kashmir mountains can interest even ICC 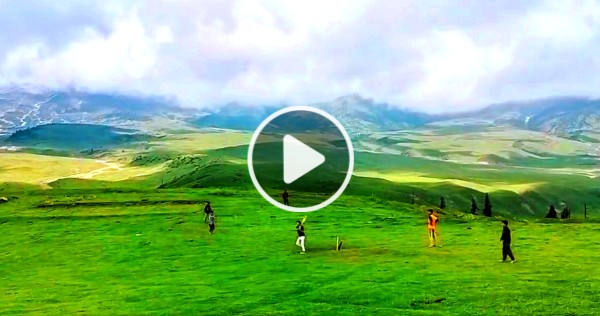 Kashmir is known for its scenic beauty. However, we bet you have never seen a more beautiful setting for a cricket match as the one in this video from Tosa Maidan meadows shared on Twitter.

The video shows a few young boys playing cricket in the upper reaches of Tosa Maidan, the beautiful meadows bedecked by jaw-dropping mountain range in Budgam district of central Kashmir.

Shot from a great vantage point, the video beautifully captures a moment in the game when a batsman hits the ball for a boundary as a camera pans to let the viewer have a glimpse of the scintillating surroundings. ALSO READ: ESPN is awed by this cricket turf nestled in Kashmir meadows

The video was shared on Twitter by Anees Zargar, a journalist who wrote: “It has reached far beyond the boundary”.

Zargar tagged the ICC as well and we are confident that we might see a reaction from the cricket body sooner or later.

Talking about Kashmir and cricket making international headlines, a few years back a photograph clicked by photographer Saqib Majeed became one of the best clicks in the sporting world that year. ALSO READ: ‘Howzat’: Players build a bridge to play cricket in Kashmir

The Srinagar-based freelance photographer did Kashmir proud, pocketing the prestigious 2016 Wisden-MCC (Melbourne Cricket Council) Cricket Photograph of the Year for a stunning image, which captured boys playing cricket at the Nishat garden in Srinagar.

The picture had perfectly captured the game and the colours of Kashmir autumn.

The latest video, we feel, can be just an addition to this repository of cricket and nature shots from the vale of Kashmir.

What do you think?