‘Howzat’: Players build a bridge to play cricket in Kashmir 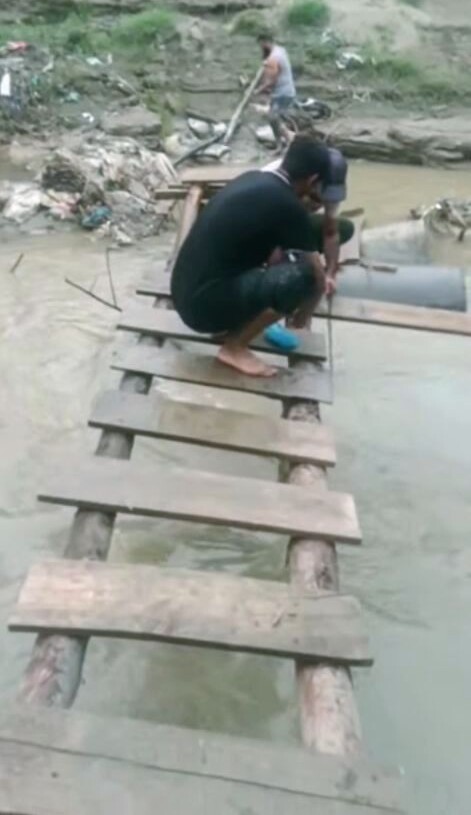 Srinagar: An under construction bridge was preventing players and spectators from reaching a cricket ground at Wathoora in Central Kashmir’s Budgam district. To overcome the problem, a group of half a dozen local cricketers made a makeshift wooden bridge in just two days.

Now, their efforts have elated the players and spectators of the area, who are now able to play and watch the cricket matches.

“Construction works at this bridge connecting the Chrar-e-Sharif Road to Shah Qalandar Sports Stadium, Wathoora had been stopped for a few months. Though the work has started now, players and spectators were facing problems to reach the cricket ground. Therefore, we decided to construct a wooden bridge in the meantime. Lots of matches and tournaments are played at this stadium regularly,” Riyaz Peer, who is the captain of the local RP Cricket Club, told The Kashmir Monitor.

He said a group of six to seven players built the bridge in two days’ time.

“It took us two days to build this wooden bridge. Six-seven players volunteered to do the work. Though one cannot ride a two-wheeler on this bridge, it is just alright for crossing over the stream that flows underneath. Players and spectators can easily reach the other side,” he said.

Mushtaq, a local, said all players and spectators of the area were elated as the Shah Qalandar Sports Stadium had become a meeting point for all cricket lovers.

“Shah Qalandar Sports Stadium hosts cricket matches and tournaments regularly. If you come here on Fridays or Sundays, you will be surprised to see that it attracts crowds in throngs. These young cricketers have not just helped other players but now hundreds of spectators too are getting benefitted. The ground is a meeting point for all cricket lovers of the area. While players play, watching cricket is a great pastime for many others,” he said. “Moreover, today a final match of a local tournament is being played at the ground. We all are happy that the bridge was built at the right time.”