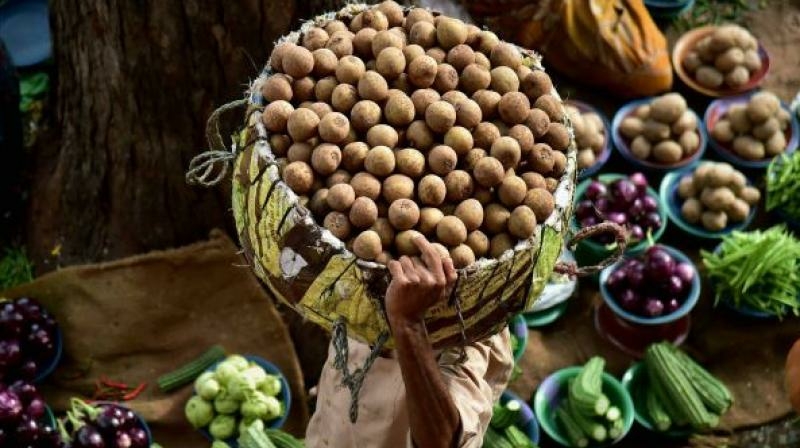 Bengaluru: India’s retail inflation likely sped up in September on higher food and fuel costs, pushed up by a battered rupee and suggesting further policy tightening from the Reserve Bank of India, a Reuters poll found.
The Indian central bank last week held interest rates unchanged, surprising many market watchers who anticipated a third consecutive hike, but shifted its stance from “neutral” to “calibrated tightening” in a nod to pricing pressures.
The median of 45 economists in the poll taken Oct 3-9 showed inflation was expected to have accelerated to the central bank’s medium-term target of 4.00 per cent last month from a year ago, higher than August’s 10-month low of 3.69 per cent.
Forecasts ranged from 3.60 per cent to 4.70 per cent, with over 40 per cent of economists expecting inflation to rise above the RBI’s target, almost one third forecast it to fall below target and the remaining 11 said it would be bang on 4.00 per cent.
“Consumer price inflation is likely to have risen in September, in large part because the recent sharp fall in food inflation appears to have reversed,” said Shilan Shah, a senior India economist at Capital Economics.
“Core inflation is likely to have remained elevated. Despite the RBI keeping rates on hold last week, the tightening cycle still has a little bit further to run.”
Although food inflation has quickened it was subdued enough to offset some of the pain coming from the double whammy of a weak currency and rising oil prices.
The rupee tumbled to a new low of 74.395 against the US dollar on Tuesday and Brent crude, India’s costliest import item, hit a four-year high this month.
According to a separate Reuters poll, the struggling rupee, which has lost over 16 percent against the greenback this year so far, was not expected to reverse its losses anytime soon.
“India’s macro concern at the moment is not the rupee, but liquidity. If the RBI takes care of liquidity, then other concerns should gradually subside,” said Shashank Mendiratta, economist at ANZ Bank.
“The RBI to that extent has taken steps to infuse liquidity by announcing OMOs (open market operations) and similar measure will be taken up through this fiscal year.”
Wholesale price inflation probably rose to 4.90 per cent in September from 4.53 per cent in August.
The poll forecast industrial output expanded 4.0 per cent in August from a year ago compared with 6.6 per cent in July.
That prediction was probably based on slower output growth from eight core industries – accounting for nearly 40 per cent of total industrial production – with annual production cooling to 4.2 per cent in August, from 7.3 per cent a month earlier.