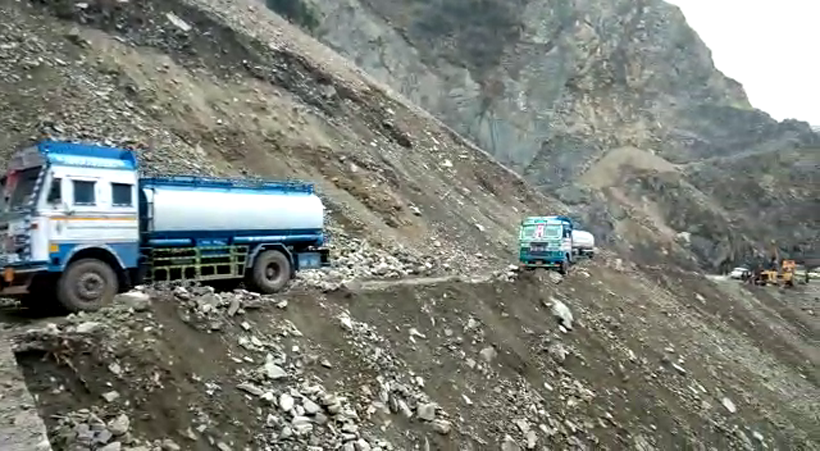 Srinagar, Feb 14: The non-completion of three major connectivity projects has been hampering the economic growth of Kashmir year-over-year (YoY) even as the valley incurs heavy losses due to closure of the Srinagar-Jammu Highway, the only road connecting the region with rest of the world.

Over the years, the government has failed to complete these projects, which could have helped Kashmir to remain accessible, and helped its economy to grow.

The first one being construction of the tunnel on Mughal Road.

Fourteen years after the centre approved construction of the tunnel, the project is yet to see daylight.

Approved in 2004, when Peoples Democratic Party shared power with Congress in the state, the project envisaged 7-km-long tunnel between Zaznar and Chathapani at 3,000 meters altitude on the 230-year-old Mughal road.

However, the work on the project is yet to be started, resulting in the closure of the 84 km road for five months each year. It not only stops vehicular services but also hampers the business, which started between the two regions when the road was repaired and made functional again.

“The construction of the tunnel would have made the Mughal Road all-weather,” an official of Roads and Development Department, said.

The Road, which goes through Shopian to Rajouri and Poonch in Jammu, remains shut from November to March each year.

“Whenever there is any downpour the highway remains closed. Had the government constructed the tunnel on the Mughal Road, it would have saved us from the losses,” Mehraj-ud-din, a fruit grower from Shopian, said.

Another fruit grower, Javeed Ahmad from Shopian said the opening of the Mughal Road brought new opportunities for business and cultural exchange between the two regions.

In August last year, the then governor N N Vohra also expressed dismay over the dilapidated condition of the Mughal Road and directed to undertake a physical and financial audit to fix responsibility for the poor maintenance of this road.

The four-laning of Jammu-Udhampur link has been completed long ago and the work on the expansion of road beyond Udhampur is underway. But the Srinagar-Banihal stretch of it is yet to be completed.

Similarly, a railway line up to Udhampur on Jammu side was completed a long ago but rail network sanctioned in 1995, which would connect Kashmir with other states, is still far from completion.

The Jammu-Srinagar railway link was declared a “national project” in 2002 by Atal Bihari Vajpayee’s government and August 15, 2007 was fixed deadline for its completion.

Advisor K K Sharma, who also holds the portfolio of Public Works Department, said that completion of all developmental works have been the priority of the Governor-led administration.

“The process for completion of all developmental works has been expedited during the Governor’s rule and funding has been approved to hundreds of languishing projects. Besides the issue has been raised with concerned authorities for completion of projects,” he added.