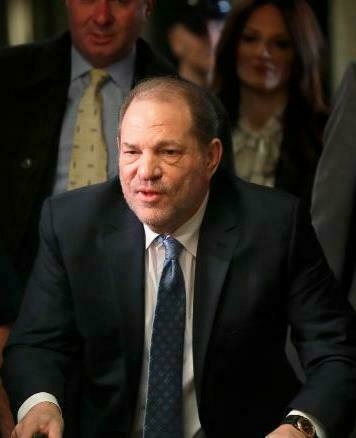 Harvey Weinstein arrives at a Manhattan courthouse for jury deliberations in his rape trial, Monday, Feb. 24, 2020, in New York. Weinstein was convicted Monday of rape and sexual assault against two women and was immediately handcuffed and led off to jail, sealing his dizzying fall from powerful Hollywood studio boss to archvillain of the #MeToo movement. (AP Photo/Seth Wenig)

Harvey Weinstein was sentenced Wednesday to 23 years in prison for rape and sexual assault, a sight the Hollywood mogul’s multitude of accusers thought they would never see.

Weinstein, who has been accused of violating scores of women, was convicted last month of raping a woman in a New York City hotel room in 2013 and forcibly performing oral sex on another woman at his apartment in 2006. He faced a maximum of 29 years in prison.

Both women that Weinstein was convicted of assaulting — a once-aspiring actress and a former TV and film production assistant — spoke in court Wednesday before Judge James Burke announced the sentence, confronting Weinstein again after their testimony helped seal his conviction at the landmark #MeToo trial.

Burke also heard from Weinstein’s lawyers, who pleaded for leniency because of his age and frail health, and prosecutors, who said the man once celebrated as a titan of Hollywood deserved a harsh sentence that would account for allegations of wrongdoing dating to the 1970s.

Harvey Weinstein told a court Wednesday that the men facing allegations in the #MeToo movement are being accused of “things that none of us understood,” saying he was confused by the rape case that was about to put him in prison.

“Thousands of men are losing due process. I’m worried about this country,” the disgraced Hollywood mogul said after two of his accusers confronted him in court.

Weinstein faced at least five years and up to 29 years behind bars in the landmark #MeToo case. He was convicted of raping an aspiring actress in 2013 and forcibly performing oral sex on former TV and film production assistant Mimi Haleyi in 2006. A second criminal case is pending in California.

Onlookers applauded the two women whom Weinstein was convicted of assaulting as they arrived in court.

Haleyi broke into tears as she told Judge James Burke that the 2006 attack scarred her deeply, made her rethink her career in the entertainment business and left her feeling paranoid and afraid of retaliation. She said she avoids dating because she doesn’t want to hurt people, have them feel embarrassed or distance themselves when they find out what happened to her.