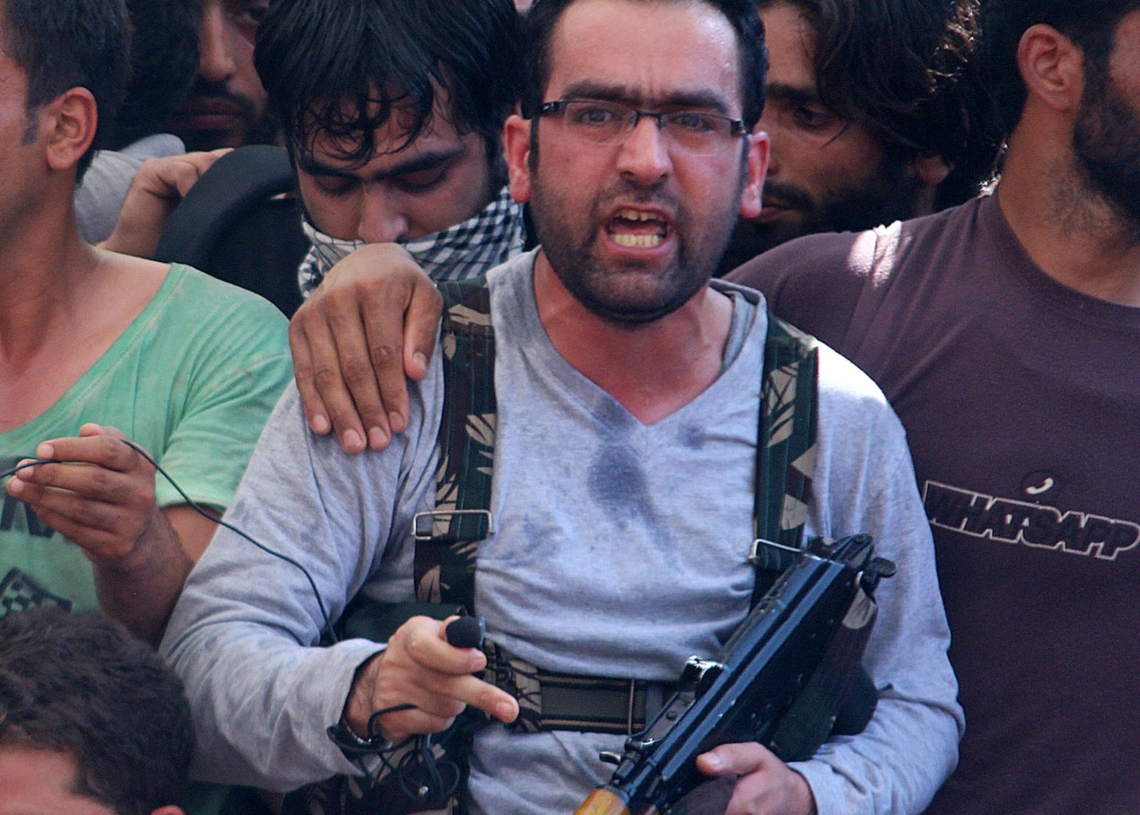 In this photo clicked on July 30 2017, Hizb militant commander Riyaz Naikoo is seen addressing a gathering during the funeral of militant Shariq Ahmad in Pulwama. Naikoo was killed in Beighpora area of Awantipora on Wednesday, May 06, 2020. (File Photo KM/Umar Ganie)

Srinagar: Security forces dealt a major blow to Hizbul Mujahedeen on Wednesday when they killed its chief operations commander Riyaz Ahmad Naikoo in an encounter at Beighpora, Awantipora in South Kashmir’s Pulwama district.

Naikoo, 35, was one of the most wanted militant commanders in Kashmir.

“Acting on the specific inputs about a high-value target, security forces cordoned off the Beighpora area and started the operation late Tuesday evening. When the forces were closing in on the target, they came under heavy fire. In the ensuing encounter, Naikoo was killed,” police sources said.

Naikoo, as per sources, had visited his home to check on an ailing family member and the security forces were tipped of about it triggering a massive cordon and search operation which soon turned into a gunfight.

Sources added that another local militant being identified as Adil too has been killed in the gunfight.

Inspector General of Police Kashmir Vijay Kumar confirmed to news agency GNS the killing of Naikoo and his associate in the gunfight.

“Riyaz Naikoo wanted by law in crimes against humanity finally taken down by Security Forces. As always a never dying sprit, resolute & single minded devotion of J&K Police at the forefront of this ugly proxy war has been the key,” Imtiyaz tweeted.

While the encounter was on, the authorities snapped the mobile internet as a precautionary measure. Security was also beefed up across the valley to prevent protests.

BJP National General Secretary Ram Madhav was among the first politicians to react to the news.

A close aide of Burhan Wani, he became the chief operations commander in 2017 when Yasin Yatoo of Budgam was killed by the security forces.

Reports have claimed he is a “tech-savvy” militant, capable of grabbing eyeballs.

Naikoo is often considered a soft face of the Hizb in Jammu and Kashmir, replacing Sabzar Ahmad Bhat who was killed by security forces in Tral in 2017. Bhat had, in turn, replaced the slain Burhan Wani as the operational chief in Kashmir.

Naikoo was arrested by the police for stone pelting in 2010. After his release, he formally joined Hizbul Mujahadeen

A highly qualified man, he was a school teacher before joining militancy. Known for his audio messages, he recently released a short clip urging people to stay indoors given the COVID 19 pandemic.

Naikoo masterminded the abduction of the family members of the cops in 2018 after his father was picked by the security forces. Several SPOs later announced their resignation.

On June 26, 2018, in an unprecedented move, Naikoo reached out to the Amarnath pilgrims reassuring them about their safety.

“Neither do we have any plan to attack Amarnath yatra nor will we attack the pilgrims. They are coming here to perform their religious duties and we have no concern with them. Neither we have attacked Amarnath yatra nor is our fight against the yatra”, Naikoo then said in a 15-minute audio message released on social media.

Voice calls suspended too, curbs to be imposed: IGP Kashmir