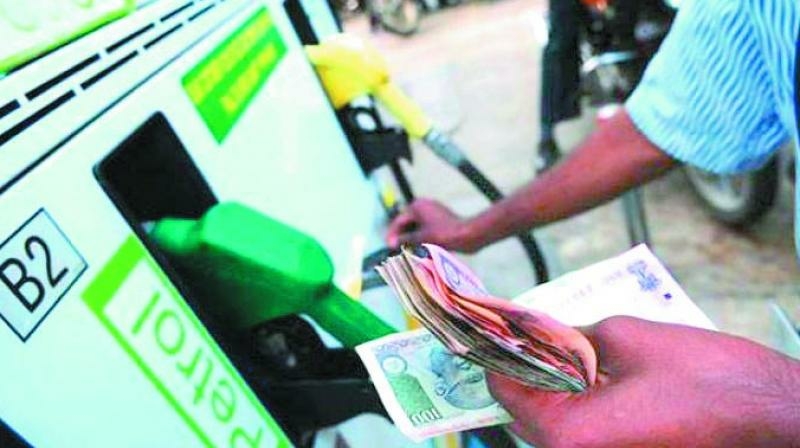 New Delhi: The excise duty cut on petrol and diesel is credit negative for In­dia as it will reduce government revenue and increase fiscal deficit by 0.1 per cent to 3.4 per cent of GDP in FY19, Moody’s Investors Service said ,
Also, the earning of public sector oil marketing companies (OMCs) would be negatively affected as they also absorbed Rs 1 per litre cut in their pricing, Moody’s said. The government on Friday cut excise duty on petrol and diesel by Rs 1.5 a litre, sacrificing Rs 10,500 crore revenue in the current financial year.
“Overall, excise duty cuts are credit negative because they will reduce government revenue collection and increase fiscal deficit,” Moody’s said in a statement.
The US-based rating agency said these measures create downside risks to the central government’s fiscal deficit target of 3.3 per cent of GDP for fiscal 2018.
“Because the government had already met 94.7 per cent of the budgeted annual deficit by August, to achieve its deficit target it will likely need to compress capital expenditure,” the statement said, adding, “Consequently, we expect the central government deficit target to slip modestly to 3.4 per cent of GDP, while the combined general government deficit (central and state) should remain at about 6.3 per cent of GDP.”
It said that the government revenue from excise duties on petroleum products has more than doubled since fiscal 2014. State governments charge value added tax (VAT) on fuel as a percentage of prices and have therefore benefited from rising oil prices.
The centre had appealed to state governments to cut VAT rates on petrol and diesel by Rs 2.5 per litre, following which several BJP and NDA ruled states like Maharashtra, Gujarat, Uttar Pradesh, Tripura, Assam, Jharkhand, Haryana, Himachal Pradesh and Madhya Pradesh followed suit.
On government asking OMCs to absorb a Rs 1 per litre in pricing, Moody’s said even as the government so far has been committed to market-based pricing, going ahead there are risks to going back on deregulation.