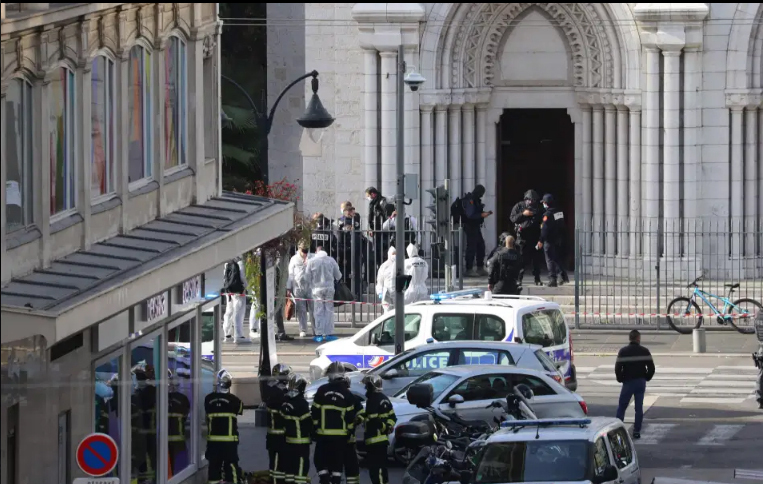 Paris :A woman and a man have reportedly been headed in a suspected terror attack outside a church in France, according to media reports.

Three people were killed in the bloody rampage which saw the knifeman storm the Basilica of Notre-Dame in Nice, south of France.

Unnamed sources said that two of the victims were beheaded the attack.

The National Anti-Terrorism Prosecutors Office confirmed they have launched an investigation.

It comes amid heightened security fears in France amid the ongoing row over cartoons of the Prophet Mohammed published by Charlie Hebdo.

Samuel Paty, 47, was beheaded by 18-year-old Abdullah Anzorov on October 17 after using the cartoons to teach his students about the importance of free speech.
Nice mayor Christian Estrosi tweeted: “I confirm that everything suggests a terrorist attack in the Notre-Dame Basilica.”

He added: “13 days after #SamuelPaty, our country can no longer be satisfied with the laws of peace to destroy Islamo-fascism.”
Cops confirmed they have also carried out several controlled explosions inside the church.

French interior minister Gerald Darmanin tweeted: “A police operation is in progress. “Avoid the area and follow the instructions.”

He announced he has called a “crisis meeting” in response to the attack.A local police spokesman said: “A man has been arrested at the scene after being shot by police.
“At least two people dead and others injured.”

Sero-prevalence survey depicts we are heading towards herd immunity: DAK