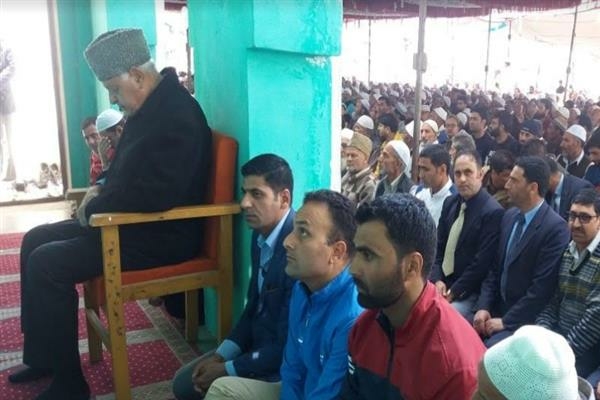 Srinagar, April 12: Jammu and Kashmir National Conference President Dr. Farooq Abdullah on Friday offered Friday congregational prayers at Asaar e Sharief Hazratbal Dargah and prayed for everlasting peace and prosperity to the state of Jammu and Kashmir.
Dr. Farooq Abdullah while paying obeisance at the shrine participated in the Majlis of Durood o Azkaar. Party president also participated in the Shab e Mehraj observance the other day.
Meanwhile earlier today noted educationalist Sheikh Gayas Ud Din joined the party today in the presence of Ex-MLA Sheikh Ishfaq Jabbar at the residence of Party president Dr. Farooq Abdullah. Welcoming Sheikh Gayas Ud Din into the party fold, Dr. Farooq said, “I am hopeful that the party will benefit from his experience in public life. The need of the hour necessitates for forging unity to trounce the machinations of those who are hell bent to destroy the special status of our state. We are seeing forces coming forth in different hues holding lotus and apples, their main intend is to destroy the identity and integrity of our state. Need of the hour demands us to show unity to trounce such forces which are contriving to infringe upon the constitutional safe guards conferring special status to our state.”
Party president said that the ensuing elections are important since it will decide the recourse of our country and state for the next half a decade. “Today country is yearning for change; it is the country’s secular progressive visage that has been dented since BJP came to power in 2014. However the ensuing elections provide us an opportunity to boot out a government that has failed out on every conceivable matrix. Our state, in particular continued to be at receiving end all along since Modi took the reins of power. The calamitous embrace of PDP with BJP opened the flood gates for such forces in the state as want to destroy our identity. Had PDP not embraced BJP-RSS combine things would have been much different on ground today. Today it is NC verses all, on one hand you have NC who has been giving sacrifices to protect the sanctity of our state flag, and on the other you have the cronies of BJP-RSS who can go to any extent to destroy the state’s identity for petty political gains. We have to remain vigilant of their machinations.”
Among others party general secretary Haji Ali Muhammad Sagar, provincial president Nasir Aslam Wani, Party treasurer Shammi Oberoi were also present on the occasion. The party senior leaders hoped that the new entrant into the party fold will work for party to make it stronger at grass roots.