Fallout of attacks: No venturing out, BJP tells Kashmir workers 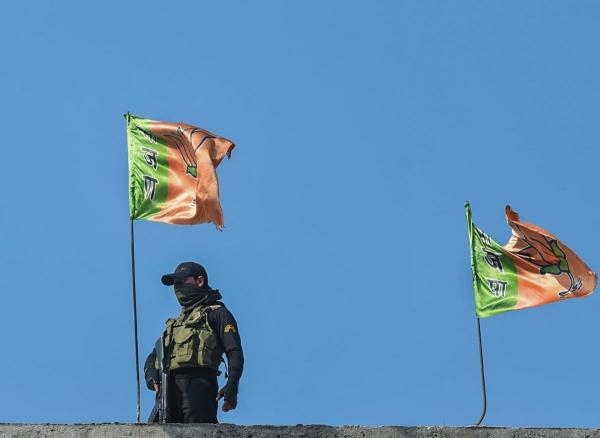 File photo of a secuity personnel on the roof of the residence of BJP leader Sheikh Waseem Bari in Bandipora district of north Kashmir. Bari and his father and brother were killed by suspected militants last month

Srinagar: Amid increased militant attacks, Bharatiya Janata Party (BJP) has asked its workers to lie low and not venture out without security clearance in Kashmir.

This follows six back-to-back attacks on BJP leaders and Panchayat members in the last one month. Fearing reprisals, many workers of the party have resigned across the valley.

“No BJP leader should venture out without security clearance. Top brass in the police should work out a plan with concerned DCs to ensure the security and safety of BJP leaders,” BJP Kashmir unit said in a statement.

The party has asked the authorities to lodge BJP leaders and workers in safe houses in a bid to keep militants at bay.

“Even I don’t move out. There is no need for jeopardizing our lives unnecessarily. We have been asked to restrict our movement. Nobody should move out of their homes without clearance from the security agencies,” said Veer Saraf, BJP’s in-charge of south Kashmir.

Saraf said the government has started accommodating workers from volatile areas in highly secured buildings. “Many Panches, Sarpanches, and Block Development Council members have been accommodated. Besides, every member has been asked to remain vigilant. Life is precious,” he said.

The central leadership of BJP is also planning a meeting to discuss the growing militant attacks.

Sources said the Centre has directed deputy commissioners in Jammu and Kashmir to ensure the security of political workers and Panchayat members.

Police and CRPF have been given the responsibility for providing security to the leaders.