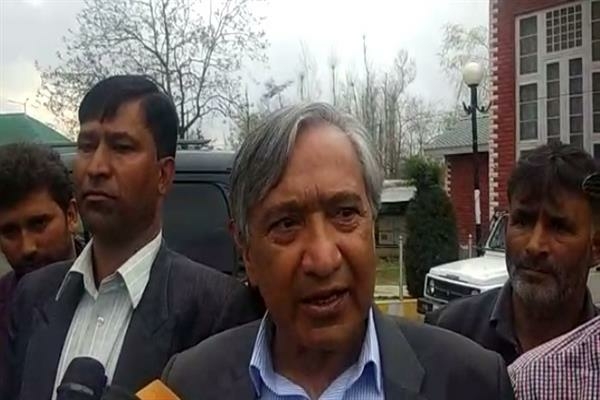 Kulgam, April 06: While calling for its immediate withdrawal of ban on the movement of civilian traffic on the 270-km-long Srinagar-Jammu national highway, CPI (M) leader Mohammad Yousuf Tarigami Saturday said the explanation of Divisional Commissioner Kashmir that “there will be no blanket ban on movement of civilian traffic on the highway” is unsatisfactory and confusing.
Addressing a party convention in Kulgam, he said “the ban on the movement of civilian traffic on the 270-km-long Srinagar-Jammu national highway twice a week would have serious repercussions. The Governor Administration must revoke the ban immediately and find an alternative for the safe passage of security forces convoys. The decision must have been taken by the Government as a security issue, but why should be the issues of patients, students, employees, businessmen, and others who will suffer hugely due to this ban left unattended?”
“This highway is the only road link that connects Kashmir with rest of the country. This is completely choking the freedom of movement for lakhs of residents as it will restrict people from going to jobs and will halt business activities. How will patients move? It is unheard-of in recent history,” Tarigami said.
CPI (M) leader said “The ban will not only deprive patients from reaching to hospitals on time but is also bound to dent the Valley’s horticulture industry and tourism. There is a large chunk of apples stored in cold storages, which requires urgent transportation to various destination in the country. The apple crop will be hit badly by the ban. Besides, it will also delay the chemical treatment of orchards. The ban is unjustified and will make small-time farmers suffer.”
“The ban will also have serious implications for upcoming tourist season as it will only add to the woes of tourists and pilgrims. There is no alternative road connectivity to Kashmir and tourists would skip coming here. It will also result in shortage of essentials as the Valley is entirely dependent on the supplies of essential items from outside,” he added.
Tarigami said “Similarly, employees, who have to reach to their offices, will have to observe a holiday when there is traffic restrictions on the highway. And what will students do, who have to attend their school, colleges and universities on the day there is ban on movement of traffic on the highway?”
He said “The biggest sufferers would be patients, who need immediate treatment, as instead of going to hospitals, they have to go to district magistrate’s office for getting a pass to travel on the highway. A patient can’t wait till a pass is issued as in some cases it can prove disastrous and life threatening.”
“There must be clarity on these issues and government must find an alternative to it before imposing the ban. Hundreds of educational institutions and hospitals can only be accessed via this crucial road,” Tarigami said.
“The convoy movement timings must be devised so as there is no inconvenience to general public. There is a need to fine-tune the standard operating procedure (SOP) for the movement of security forces convoys so as there is no clash with the movement of civilian traffic. The timing of the security forces’ convoy could be fixed such that it is different than the timing when highways and other roads witness peak civilian traffic movement,” CPI (M) leader added.