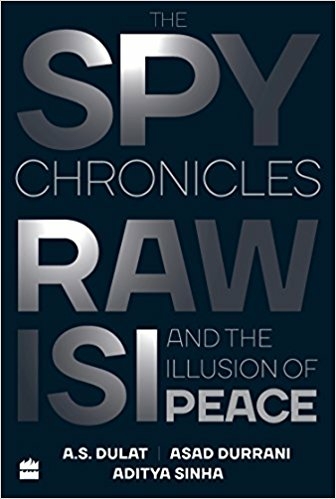 New Delhi, May 21: In what is billed as the first-of-its-kind book, former RAW chief A S Dulat and ex-ISI head Asad Durrani feature in conversation and discuss topics including everything related to India-Pakistan ties: the surgical strikes, Kulbhushan Jadhav, Nawaz Sharif, Kashmir and Burhan Wani.

The Spy Chronicles: RAW, ISI and the Illusion of Peace is written jointly with Aditya Sinha and also touches upon other key issues such as a comparison of RAW and ISI, Hafiz Saeed and even a freewheeling talk on the idea of ‘Akhand Bharat’, among many others.

“It’s timely and relevant as it comes out at a time when Indo-Pak ties are at an ebb, and there is continuing unrest in Kashmir, and is a small effort in the quest for peace in the on-again-off-again relationship between the neighbours,” says publisher HarperCollins India.

Sometime in 2016, a series of dialogues took place which set out to find a meeting ground, even if only an illusion, between Dulat, who headed the Research and Analysis Wing from 1999-2000, and Durrani, Director General of Inter-Services Intelligence directorate from 1990-91. As they could not meet in their home countries, the conversations, guided by Sinha, took place in cities like Istanbul, Bangkok and Kathmandu.

On the table were subjects that have long haunted South Asia, flashpoints that take lives regularly. It was in all ways a deep dive into the politics of the subcontinent, as seen through the eyes of two spymasters.

When the project was first mooted, General Durrani laughed and said nobody would believe it even if it was written as fiction, HarperCollins said.

“We have tried to stay as close to the truth as we believe it to be even if some of it is regarded as fiction. The reality is that there are normally more than two sides to most stories. Truth is a kaleidoscope,” Dulat said about the book.

According to Durrani, “Some of us are bursting with wisdom that can hardly wait to be shared. One of the more useful means to do so would indeed be an exchange amongst key players on the opposite sides – provided, of course, we were prepared to concede our faults and provide a different narrative.”