Deserving families in north Kashmir not getting benefitted from sponsored schemes 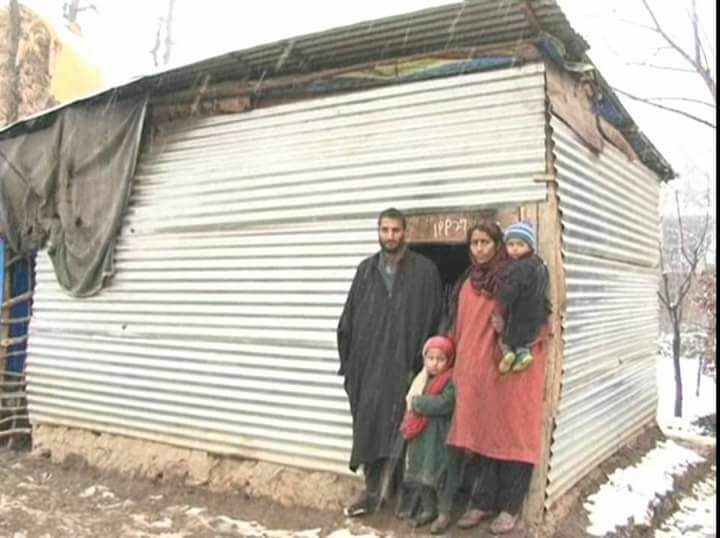 Baramulla, Feb 15: Indira Awaas Yojna (IAY) and National Rural Employment Guarantee Act (NREGA) are not benefitting any poor families in North Kashmir.
Poor families in Khargam village at Patan, Baramulla, are still suffering to get benefits under these schemes despite having completed all formalities.
Ghulam Mohammad, a local, told The Kashmir Monitor that the poor families were forced to live in tin sheds amidst hardships, especially in the winter.
He said they had approached the district administration including the Block Development Officer several times, but to no avail.
“At the time of election, every politician visits us to seek votes against the promises they make to us. But when time comes to listen to our sufferings, none of the politicians brothers to see us,” said a woman, amidst tears.
A man living with his family in one-room tin shed said, “We are worst affected in multiple ways. Fake hopes from the administration add to our sufferings.”
“On one hand, the government of India is bringing out schemes for the poor, and then the deserving families get neglected. This indicates that a poor man is valueless here.”
Sources in the Block Development department told The Kashmir Monitor that the situation was even worse in other blocks of the district.
Block Development Officer Patan, Showket Ahmed, said a new survey has been done in the area a month ago.
“The new list of deserving families had been sent to the higher authorities. Within a month, the list shall be approved and the families benefitted,” he said.
In several villages of Baramulla, funds under NREGA scheme are allegedly misused by the contractors.
A group of labourers who worked under this National Rural Employment Guarantee Act told The Kashmir Monitor that the money has been “misappropriated and distributed among those who have not worked and were not entitled to receive the amount”.
Almost in every village, the same fraud was going on, they said.
Officials, despite knowing everything, are not taking action against these contractors, they said.
Deputy Commissioner Baramulla, Dr Nasir Naqash, told The Kashmir Monitor that “proper procedure” and “proper survey” was followed for utilisation of funds.