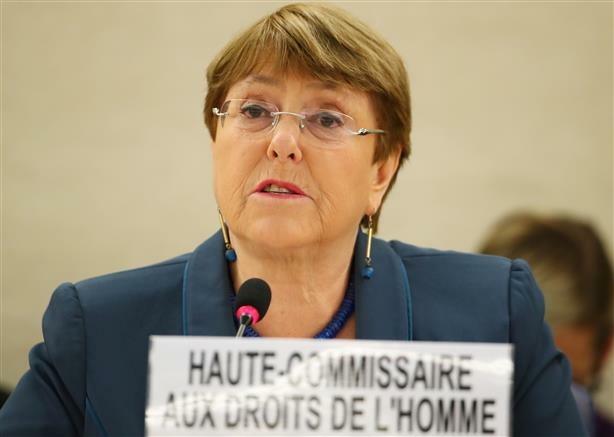 Updating the ongoing 43rd Session of the Human Rights Council in Geneva on human rights developments around the world, UN High Commissioner for Human Rights Michelle Bachelet also spoke about the situation in Jammu and Kashmir.

“Indians in huge numbers, and from all communities, have expressed – in a mostly peaceful manner – their opposition to the Act, and support for the country’s long tradition of secularism,” she said.

“I am concerned by reports of police inaction in the face of attacks against Muslims by other groups, as well as previous reports of excessive use of force by police against peaceful protesters.

“This has now widened into broader inter-communal attacks, with 34 people killed since Sunday. I appeal to all political leaders to prevent violence,” said the former Chilean president.

The communal violence over the amended citizenship law in northeast Delhi has claimed 34 lives so far and left over 200 people injured. Frenzied mobs have torched houses, shops, vehicles, a petrolpump and pelted stones at police personnel.

Ministry of External Affairs Spokesperson Raveesh Kumar said on Thursday that law enforcement agencies were working on the ground to prevent violence and ensure restoration of confidence and normalcy.

“Senior representatives of the government have been involved in that process. The prime minister has publicly appealed for peace and brotherhood. We would urge that irresponsible comments are not made at this sensitive time,” Kumar said.