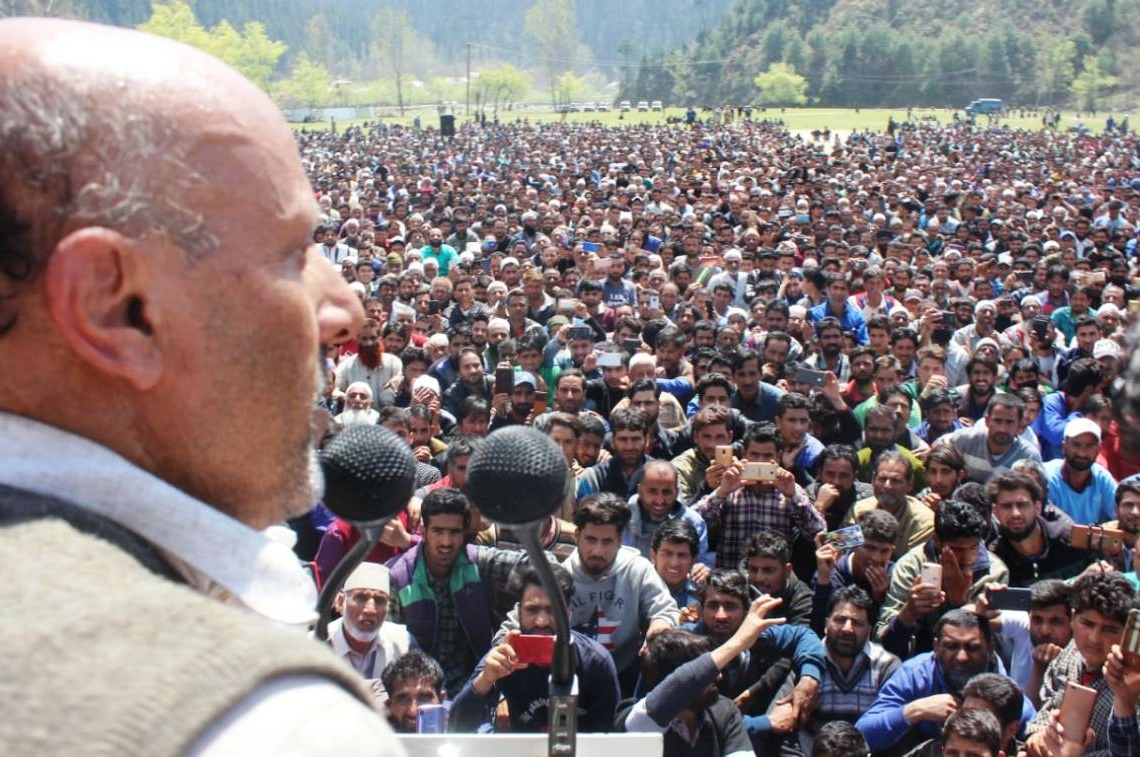 Srinagar, April 06: Appealing masses to cast their vote in every village, Mohalla, hamlet and town, AIP parliamentary candidate from north Kashmir Rasheed has said that Delhi’s all efforts to suppress Kashmiris have failed and Kashmiris will emerge victorious in the war declared against them.
Addressing mammoth gathering at Kupwara and Baramulla and Sangrama today Er Rasheed said that Delhi has declared war against Kashmiris at all fronts and people of J&K are facing worst kind of suppression since Dogra Rule.
Rasheed said, “Be it restricting of vehicular traffic on so-called national high way or subjecting inmates in central jail to worst kind of torture inside the jail Delhi’s proxies in Kashmir are leaving no stone unturned to expose their colonial mindset. May the Governor administration explain on whose behest it has used force inside central jail, hurt religious sentiments of prisoners and used even shells against unarmed, helpless, caged Kashmiris, who are not criminals but only political prisoners. The government must ensure the safety of every single detune and should not play with the fire. Whatsoever Delhi may do it is destroying its own credibility and is running out of options by these silly measures.”
Rasheed appealed masses to vote to cut across party affiliations in his favor, so that people of India and the world community is made to listen and understand the truth, which is often being misquoted by various agencies and a vested class of bureaucrats.
Holding Omar Abdullah, Mehbooba Mufti and Sajad Lone responsible for the ongoing assault on economic, moral, constitutional and political integrity of Jammu and Kashmir Er Rasheed said that the non-seriousness, casual and chameleon behaviour of all these three parties has given Delhi a free hand and courage to take Kashmiris far-granted.
He said, “To save J&K and to ensure a time-bound resolution to seventy-year long dispute need of the hour is to uproot all these three political parties who have become faces of Delhi’s oppression and are worst collaborators. It is high time for the gross root cadres of NC, PDP and PC not to forget that they are all Kashmiris and just to build emperors of these three families they should not ruin future of their own kinds.”
Rasheed appealed to police and civil administration to discharge their duties without fear or favour and asked them to ensure that every voter is able to cast his vote without any pressure or any compulsion.