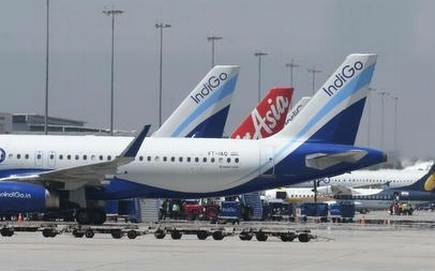 Srinagar: After briefly opening the sales window, the airline companies have postponed the bookings till June after the government extended the lockdown till May 17.

Sources said the airline companies haven’t reported enough sales during the last two weeks as people have been expecting the lockdown to get extended.

“Though the airline companies had slashed the airfare by nearly 40 percent, it couldn’t attract customers. With the increasing number of coronavirus cases, people have been anticipating lockdown to continue,” they said.

An air ticket from Srinagar to New Delhi is currently sold at Rs 2400 for June 1.  The return ticket to Srinagar costs Rs 2800.  The same is the case with other destinations including Mumbai. The ticket prices have been slashed by 40 percent for the Srinagar-Mumbai journey.

On March 23, Union Ministry for Civil Aviation suspended domestic and international flight operations to contain the spread of coronavirus. Only cargo and other flights approved by DGCA have been operating for the last 41 days at the airports.

Officials at the Srinagar international airport said there was least possibility of flight operations to resume under current circumstances.

Director Airport Authority of India, Srinagar International Airport, Santosh Dhoke told The Kashmir Monitor that they haven’t received any communication about the resumption of air traffic.

“We haven’t got any direction from the ministry of civil aviation about resuming flight operation. When there will be an announcement, it will be for all airports of India,” he said.