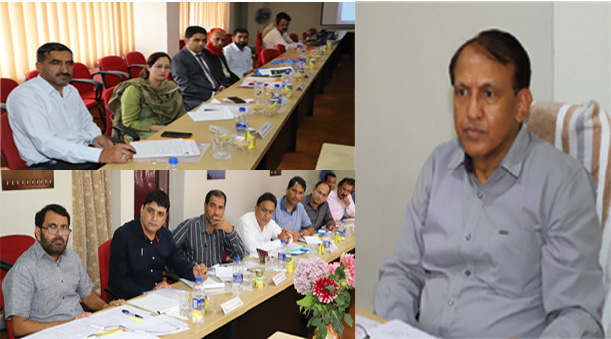 Srinagar, Sep 1: A conference of Jail Superintendents of Kashmir based jails was held here on Saturday under the chairmanship of Director General of Police (DGP), Prisons, V K Singh.

During the inaugural address, the DGP Prisons appreciated the improvement in availability of escort for prisoners as the default percentage has reduced from 30 to 15 percent. He informed that the Department is modernizing the interview rooms in jails by way of construction of sound proof cabins and child friendly corners. He said that it is proposed to have an inmate calling system which will enable the inmates to call their relatives and advocates initially at Central Jail Srinagar, Kotbhalwal and District Jail Jammu.

While highlighting the role of recreation in reformation of inmates, V K Singh said that a recreation center is going to be set up at Central Jail Srinagar soon which will have a gym, barber shop, canteen, bakery shop, besides a recreational hall. He also informed that in order to boost the cultural activities, more musical equipment is being procured for inmates at Central Jail and District Jail Jammu.

The DG Prisons appreciated the efforts made by Jail Superintendents for improving the vocational and educational skills of inmates and also for maintaining discipline in Jails.

During the Conference, presentations were made by the participating Jail Superintendents which were followed by an open discussion regarding infrastructure requirements, financial and other issues.