Complete estimation of works under MGNREGA without delay: Veeri to REW 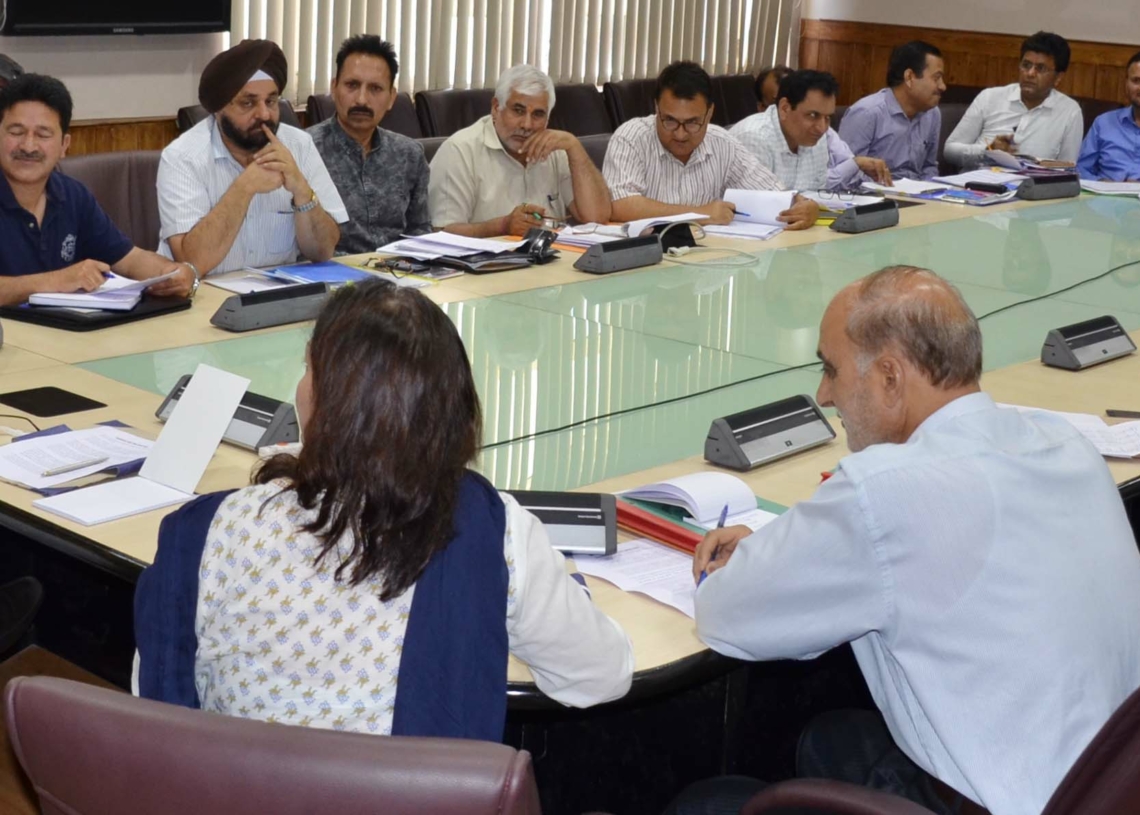 SRINAGAR, JUNE 04: Minister for Rural Development and Panchayati Raj Abdul Rehman Veeri today asked the engineers of Rural Engineering Wing (REW) of the department to complete the process of estimation of works for the current financial year at the earliest so that works as per the action plan be taken up under MGNREGA.
The Minister gave these directions while chairing a meeting convened with the engineers of the Rural Engineering Wing (REW) to review to review the progress on estimates sanctioned under MGNREGA for 2018-19.
Secretary RDD Sheetal Nanda, Director Finance RDD S L Pandita, Director RDD Kashmir M N Sheikh, Joint Director Planning RDD, Superintending Engineers Jammu, Kashmir and Executive Engineers from both the divisions attended the meeting.
During the meeting, the Minister sought district wise details of Action Plan prepared for the works to be taken up and estimates sanctioned so far under the programme for the current financial year. The Minister directed for completing the estimation process within 20 days.
It was noticed in the meeting that the Executive Engineers have not been provided with the copy of Action Plan prepared for the districts and both the Directors of RDD were asked to ensure that copies be provided to them in time so that action is taken accordingly for sanctioning the estimates.
The Minister discussed the performance in creating the assets and generation of person days at district level with the Executive Engineers.
“The engineering wing of the department (REW) plays equally an important role in implementation of schemes/programmes on ground as they provides technical support to the department in properly utilizing the funds under MGNREGA and to help the rural people in getting employment, creating facilities for them”, the Minister said.
Veeri asked the engineers to ensure that balance in wages/material ratio i.e, 60:40 is maintained as prescribed by the GoI. He further said that labour oriented works needs to be prioritized so that wages and material ratio is easily maintained. ‘Thrust should be given for creation of irrigation kuls, playgrounds, protection bunds etc in convergence where the labour component be easily utilized’, he added.
The Minister stressed on close coordination between the administrative department and engineering wing so that efficient implementation of schemes/programmes can be made visible on ground. He said that the engineers need to understand their role, responsibilities and to ensure that they not only limited themselves to giving technical sanctions to the works but also visits the sites for monitoring and supervision of the works.
“Do not limit yourselves to the technical part only, it’s your responsibility to monitor the works on the ground and ensure that quality works are being carried out for creating durable assets”, Veeri said adding that executive engineers should make a monthly report indicating the details of works inspected during the month.
Veeri asked the executive engineers to adopt a proactive approach and to coordinate with each other at every level. He said that SEs should coordinate with Director’s RDD and Executive Engineers with ACDs at district level so that desired progress is made under the programme.
He asked for taking up the left out works directed by Chief Minister during her public outreach programme in this year’s action plan.
Taking strong note of slow progress in person day’s generation in Kargil and Leh district, the Minister asked the concerned XeNs to expedite the progress as there is short working period in the Ladakh region in comparison with other regions.
Secretary RDD asks the Executive Engineers to work with latest technologies so that MGNREGA programme is implemented to the fullest. She said that having technical expertise, the engineers must think over new possibilities which can be utilized under the programme and maximum benefits would be provided to the rural people.
“Our job is to create durable assets for the rural people at low cost, that could be done if engineers of the department applies new ideas and think out of box to properly utilize the funds available under MGNREGA with innovation”, Secretary RDD said.