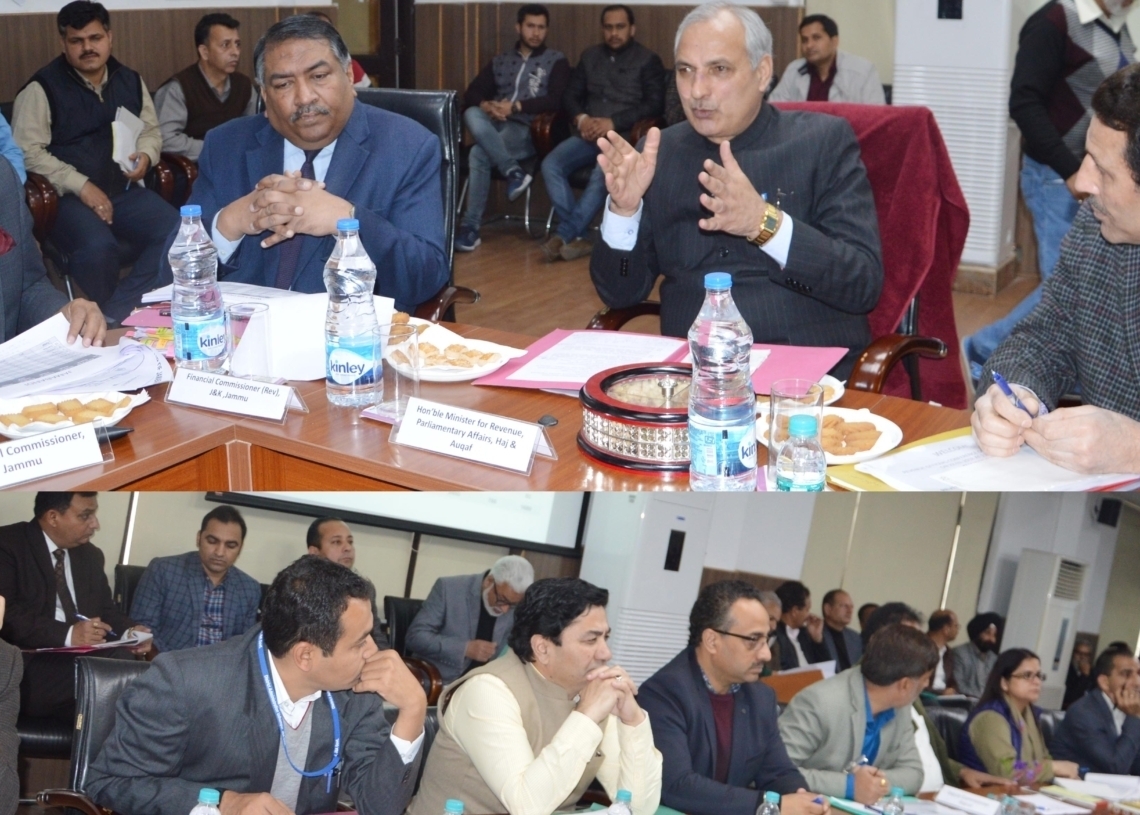 JAMMU, FEB 22: Minister for Revenue, Hajj & Auqaf and Parliamentary Affairs, Abdul Rehman Veeri has said that dedicated efforts needs to be put in for timely disposal of Revenue related cases. People have huge expectations from the department and our action taken in this regard would facilitate people with justice in time.
This was stated by the Minister while addressing the conference of Revenue officers of Jammu Division, here today.
Financial Commissioner Revenue Lokesh Jha, Commissioner Secretary Revenue, Shahid Inaytullah, Divisional Commissioner Jammu Hemant Sharma, Deputy Commissioners of Jammu Division along with other senior Revenue officers including ADCs, ACRs and SDMs attended the conference.
During the conference, Divisional Commissioner Jammu apprised the Minister about the general overview of all the districts along with the progress achieved by each district under various Revenue related activities.
It was informed that Jammu Division consists of 10 districts, 33 Sub Divisions, 108 Tehsils, 273 Niabats, 824 PatwarHalqas and 3773 revenue villages. During 2017-18, 04 Sub Divisions have been upgraded to the post of ADC.
Initiating the conference, the Minister sought report on decisions taken during the district level conferences and performance made under each activity.
During the conference, detailed discussions were held on present status of various activities being carried out the in the districts including writing of jamabandi, attestation of mutations, eviction of state/kacharai land, land acquisition, disposal of revenue cases, issuance of certificates, public grievances camps held and other related activities.
While discussing the process of writing of Jamabandi district wise, the Minister was informed that target has been fixed for writing and ACRs/SDMs have been asked to personally monitor the progress on weekly basis. All the DCs gave brief about the progress under writing of Jamabandi.
Veeri asked the officers to adopt calculated approach for better performance and to clear all the pending cases. He said that SDMs have been now given revenue powers so that they can contribute in routine works of the department.
“ACRs and SDMs also need to monitor the revenue business in their respective areas and to convene fortnightly meetings to review the process”, he said.
For writing of KhasraGirdawari, the Minister said that updation of KhasraGirdawari must be taken on priority and Revenue officer must visit the spot on ground before writing girdawaris. He said that this will also help in realizing the actual position on ground.
With regard to attestations of pending Mutations, the Minister stressed on clearing the pendency at the earliest and reviewed the status of Mutations attested during last one year.
The Minister also sought the reasons for delay in clearing the pending cases where the figure is still high and asked the concerned to expedite the same. He lauded the efforts of Revenue Officers of the districts where the number comes to zero.
Seeking details on the progress made on the project, Modernization of Land Records under DLRMP, project initiated by Government of India, the Minister directed Regional Directors Survey & Land Records to energise the efforts so that the project would be completed at the earliest.