CM’s commitments to be fulfilled in letter-n-spirit: Javaid Mustafa Mir 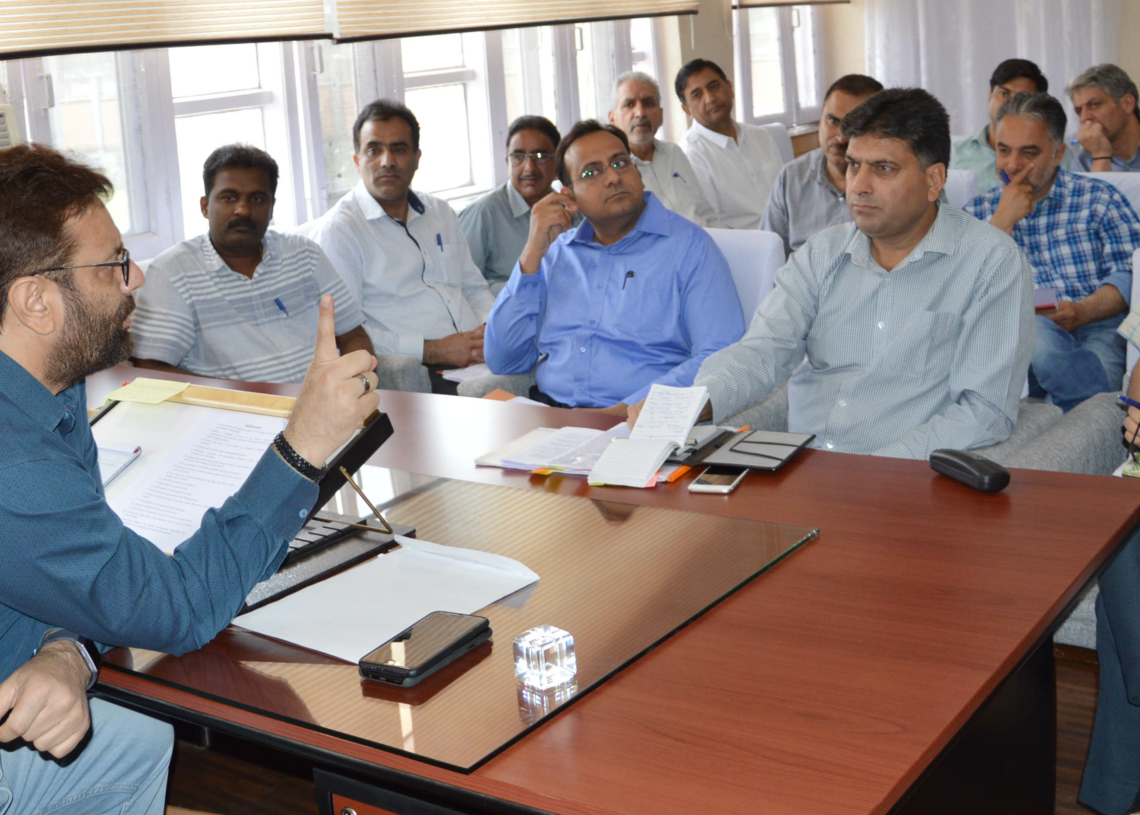 SRINAGAR, JUNE 07: The Minister for Floriculture, Disaster Management, Relief Rehabilitation & Reconstruction Javaid Mustafa Mir, today, directed the officer of the Floriculture Department to fulfill the commitments of the Chief Minister in letter and spirit.
The Minister conveyed these directions while chairing a meeting of senior officers of Floriculture and other concerned Departments, here today. The meeting was convened to take stock of Action Taken Report (ATR) on the commitments of Chief Minister which she made to public with regard to development of new parks and up-gradation, beautification and maintenance of existing parks in the State.
The Minister also reviewed the overall progress registered by the Floriculture Department.
Commissioner/Secretary Forests, Sourabh Bhagat, Secretary Floriculture and DMRRR Talat Parvaiz, Director Agriculture, Kashmir Altaf Andrabi, Director Horticulture, Kashmir M. A. Qadri, Director Floriculture Kashmir, Mathura Masoom, Director Floriculture, Jammu, Babila Rakwal, Director (Plg) PD&MD Tariq Ahmad, MD, JKHPMC Syed Abdul Qasim besides senior officers of Forest, Tourism, Agriculture, RKVY, SKUAST and Floriculture department attended the meeting.
The Minister appreciated the efforts of the Department due to which the Asia’s largest Tulip Garden, Srinagar, maintained by the Floriculture Department has been included in the world book of records.
Saying that the floriculture is the face of J&K the Minister said the state of J&K has immense potential in this sector and called for collective efforts to tap its potential to the optimal.
The Minster said that in each district of the State one Model Park will be developed on modern lines where all the facilities including gym, children’s amusement, walkers path etc will be kept available. He directed the concerned officers to identify the land or existing park for the purpose and accordingly prepare DPRs for the same.
While taking stock of the ATRs on the Chief Ministers commitments, the Director, Floriculture Department, Jammu, apprised the Minister that Chief Minister has committed to the people for the development, up-gradation and maintenance of 14 Parks in Jammu province which include Solar Park, Reasi, Public Park Doda, Batote Park (Aromatic) in Ramban District, Kathua, Bani, Samba Public Parks besides 4 parks in Rajouri.
Giving a detailed ATR on the commitments, the Director informed the meeting that where ever transfer of land is concerned has been taken up with the concerned authorities and for funding purposes the Planning Department has been approached accordingly. She said that out of 14 projects taken up on CM’s commitments, work on 8 projects is in progress and will be completed till September this year.
Likewise, the Director Floriculture, Kashmir, Mathura Masoom, briefed the Minister about the ATR in Kashmir Division. She said that CM has committed development, up-gradation and maintenance of 12 Parks in Kashmir Division which include Public Parks at Sallar, Khiram, Hamulla, Mauchirry and Hill View Park at Kokarnag, Singpora and Kriyapa Parks in Baramulla, Nishat Park in Bandipora, Irrigation Park in Sumbal, Public Park in Ganderbal, Public Park Trehgam Kupwara and Public Park near Degree College, Handwara.
The Director said that work on the development of new parks and upgradation and maintenance of existing parks is in full swung. She said that the matter of land transfer for Hill View Park at Kokarnag has been taken up with the concerned authorities. She said that out of 12 projects taken up on the commitments of the CM, 8 projects will be completed till September 2018.
Reviewing the functioning and progress of the Floriculture Department, the Director, Floriculture, Kashmir informed the Minister that Rs 1.00 crore were provided for illumination of the Mughal Gardens. She said the work has been taken up this year which is in full swung. She said that there are as many as 150 uptown and down town parks in the Srinagar city which are being maintained by the department properly.
The Director Floriculture, Jammu, gave details of the work done and future plans with regard to Jammu division.