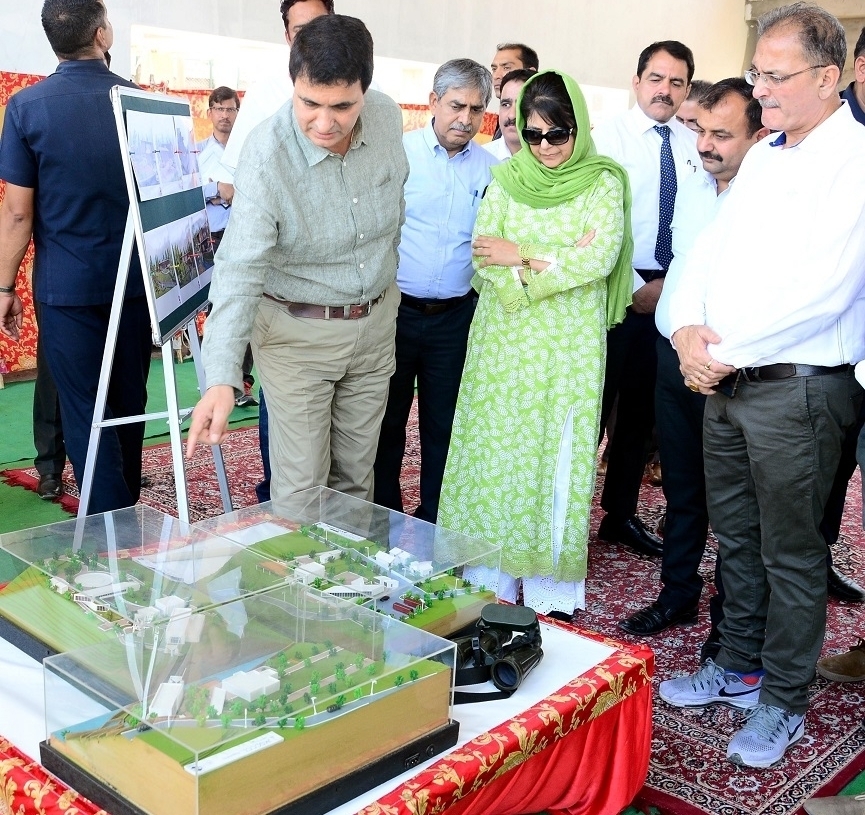 JAMMU, MAY 21: Chief Minister, Mehbooba Mufti today conducted a whirlwind tour of Jammu city and adjoining areas to inspect the pace of work on several developmental projects undertaken in the winter capital.
Deputy Chief Minister, Kavinder Gupta accompanied the Chief Minister during the visit.
The Chief Minister visited General Bus Stand and took stock of the modernization project and development of multi-level parking there.
Mehbooba Mufti was informed that work on Rs 213 crore project is apace which is expected to be completed by early next year. She was informed that the multilevel parking facility would have space for accommodating 1300 cars and 200 two wheelers besides commercial spaces like restaurants and other office premises. It would also have an elevated corridor from Super Specialty Hospital, Jammu for passenger convenience besides another link to Nawabad.
Minister for Housing & Urban Development, Sat Sharma; Financial Commissioner, Housing & Urban Development, K B Aggarwal and other officers were present on the occasion.
The Chief Minister also visited the upcoming Jammu zoo project which is coming up at a cost of Rs. 121 crores. She was informed that on completion it would be the largest Safari zoo in Northern India which would also have the largest aviary in the country. The zoo would have a 12-kilometre-long circular green track besides walking loops. Though the zoo is getting completely ready by 2020, part of it is being thrown open by October this year in the form of nine bird enclosures and a butterfly park.
MLA, Nagrota, DevenderSingh Rana; Commissioner-Secretary, Forests, Saurabh Bhagat and other officers were present on the occasion.
Mehbooba Mufti visited the newly set up Indian Institute of Technology at Jagti and interacted with the management and faculty. She was informed that the first phase of construction on the project would be completed by July this year with the admission of third batch of students.
The Chief Minister was informed that it is expected that in 10 years the IIT would have a student footfall of more than 12000 and subjects like tunnel technology, Himalayan technology, geotechetc are being incorporated in the curriculum. She was informed that eight-kilometer-long boundary wall of the campus has almost been completed and all undergraduate labs would be ready by July this year.
Minister for Higher Education, Imran Raza Ansari; MLA, Devinder Rana and senior officers were present on the occasion.
The Chief Minister also laid the foundation of Tribal Bhawan at Jagti which would come up at a cost of Rs 73 crore. It would have six blocks, an auditorium for 400 people and an Amphitheatre. The project is expected to be completed within two years.
Minister for Tribal Affairs, Choudhary Zulfkar; MLA, DevenderSingh Rana; Vice Chairman, GB Board, Choudhary Gulzar Khatana; prominent Gujjar leader Choudhary Abdul Hamid and other prominent citizens were present on the occasion.
Mehbooba Mufti also visited the upcoming Ropeway project at Maha Maya in the Jammu city and she was informed that the first phase of the cable car would be ready by July this year.
The Chief Minister visited the Bhour floral camp and inspected the pace on upgradation project.
Mehbooba Mufti was informed that the second phase of Rs. 10 crore project envisages setting up of a Floriculture Centre spread over 180 kanals of land.
Minister for Floriculture, Gardens & Parks, Javed Ahmad Mir was present on the occasion.
The Chief Minister later visited the site of expansion of Jammu Airport. She was informed that the transfer of possession of 17 acres of land from Army has been completed and the work would be awarded this month only. The expansion work, she was informed, would be completed within 20 months.
Divisional Commissioner, Jammu, Hemant Sharma; IGP, Jammu zone, Dr. SDS Jamwal and officers of Divisional and District administration were present on the occasion.