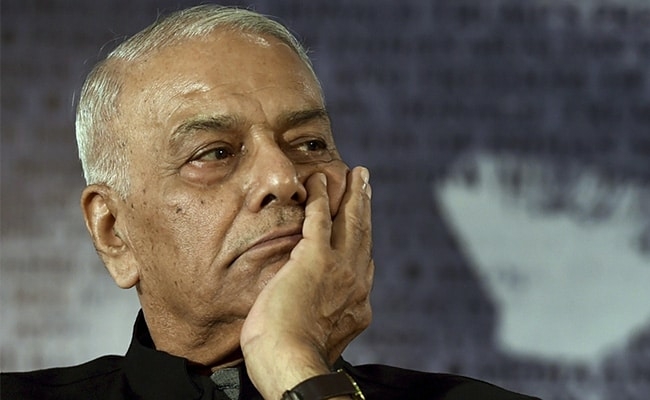 Srinagar, June 19: While reacting over the BJP pulling out of Alliance with PDP, India’s former Finance Minister Yashwant Sinha said that BJP pursued Chanakiyan policy and dumped PDP to enhance their vote bank in 2019 Parliament elections.
“BJP betrayed Mehbooba Mufti to have an edge in coming Parliament elections. BJP will use Kashmir and Pakistan as major issues to gain votes. Mehbooba Mufti is not at fault at all and there was in fact no disagreement between the two parties on any major issue. It is a well chalked out strategy of BJP to use Kashmir and Pakistan as major issues to gain votes,” Sinha told news agency CNS in an exclusive interview.
While hailing the role of Mehbooba Mufti as Chief Minister of Jammu and Kashmir, Yashwant Sinha said that he agrees with Mehbooba Mufti that muscular policy will not bear any positive results. “Kashmir is a political issue that needs to be resolved politically. Military might and muscular policy will complicate the situation. Much annoyance to the BJP, Mehbooba always pitched for dialogue and I agree with her policies and measures she wanted to undertake as Chief Minister,” he said.
While responding to a question, Yashwant Sinha said that the pulling out of BJP from Alliance with PDP is not surprising but shocking as well and it shows how much this party is eager to play Kashmir card in coming elections.
Sinha who arrived in Kashmir capital Srinagar shortly after BJP ended its alliance with PDP refused to comment when asked if he will be the next Governor of Jammu and Kashmir. “I don’t want to comment on this issue,” Sinha said. (CNS)