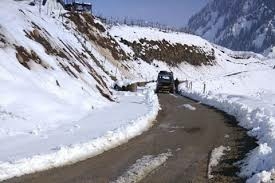 Srinagar, April 10: A day ahead of parliament elections in Baramulla-Kupwara seat, Beacon authorities have opened the Gurez-Bandipora road for four-by-four vehicles by clearing snow which had accumulated during winter.
Officials said the snow clearance teams of 56RCC/BEACON have connected Gurez with mainland Kashmir by completing snow clearance for one way for vehicles before the date of elections.
“This is for the first time that despite of record high snowfall in this winter the Bandipora-Gurez road has been thrown open in second week of April itself. It’s a great achievement for us,” Ltcol APS Khaira, Oc 56 RCC said.
“We worked day and night in extreme weather conditions to achieve this landmark for earliest ever opening of Razdhan Pass. This has not only facilitated the conduct of General elections in Gurez and Tulail valleys but also helped the stranded local populace by connecting them with mainland,” he said.
Gurez-Bandipora road remains closed for four months due to heavy snowfall in winter which cuts off Gurez’s arterial connectivity with the rest of Kashmir and the world.
The only access to the area remains by a helicopter travel which the authorities keep available for exegesis.