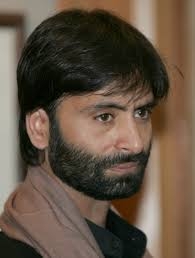 Srinagar, Feb 04: Jammu Kashmir liberation front (JKLF) chairman Muhammad Yasin Malik Sunday said that attack on Kashmiris in Indian states and the plight of Kashmiri prisoners is not anything new.
Yasin Malik while condemned the attack on the lives of two Kashmiri students at Mehandragad Haryana and plight of Kashmiri prisoners languishing in Indian and Jammu Kashmir jails especially Tihar jail, Udhampor Jail and SOG camp Aaminoo Kulgam .
Terming the attack on Kashmiri students, Aftab Ahmad and Amjad Ali in Indian state Haryana as another example of growing hooliganism against Kashmiris and Muslims in India, JKLF chairman said, “that when hooligans, goons and assailants start enjoying the patronage of the state, the situation becomes more gloomy and condemnable.”
JKLF chairman said that RSS backed rulers in India and their puppets in Jammu Kashmir , “have adopted a policy of terrorizing Kashmiri Muslims in whatsoever form possible and attacks on Kashmiri students, businessmen, travelers and families across Indian states is part of this wicked plan.”
He said that immediately after such attacks, so-called Kashmiri Rulers and occupational authorities rush to issue statements of condemnation and probes but till now no criminal or assailant has been penalized or even booked.
JKLF chairman said that on daily basis we witness attacks on Indian Muslims and Kashmiris by bigot fascist forces and these attacks are a direct consequence of the patronage provided to attackers by present ruling regime of India.
While condemning the plight of Kashmiri prisoners languishing in different Indian jails including Tihar and also in Jails of Jammu Kashmir especially Udhmapor Jail and torture centre of SOG at Aaminoo Kulgam, JKLF chairman said that Udhampor Jail has been turned into a torture centre for Kashmiri Prisoners where they are beaten, humiliated and subjected to inhuman treatment on daily basis.
He said that from almost three months, dozens of Kashmiris including Bilal Ahmad Sheikh, Khalid Ahmad Wagay, Majid Ahmad Zargar, Fahim Ahmad Sheikh, Raof Ahmad Shiekh, Aaquib Ahmad Sofi, Arif Ahmad Dar and others are being kept hostage at SOG camp Aaminoo Kulgam where they are tortured and humiliated on daily basis.
JKLF chairman said that the families of these inmates are apprehensive for the safety of their loved ones and we appeal to ICRC to take note of this Indian aggression and try to save the lives ofthese young and old Kashmiris.