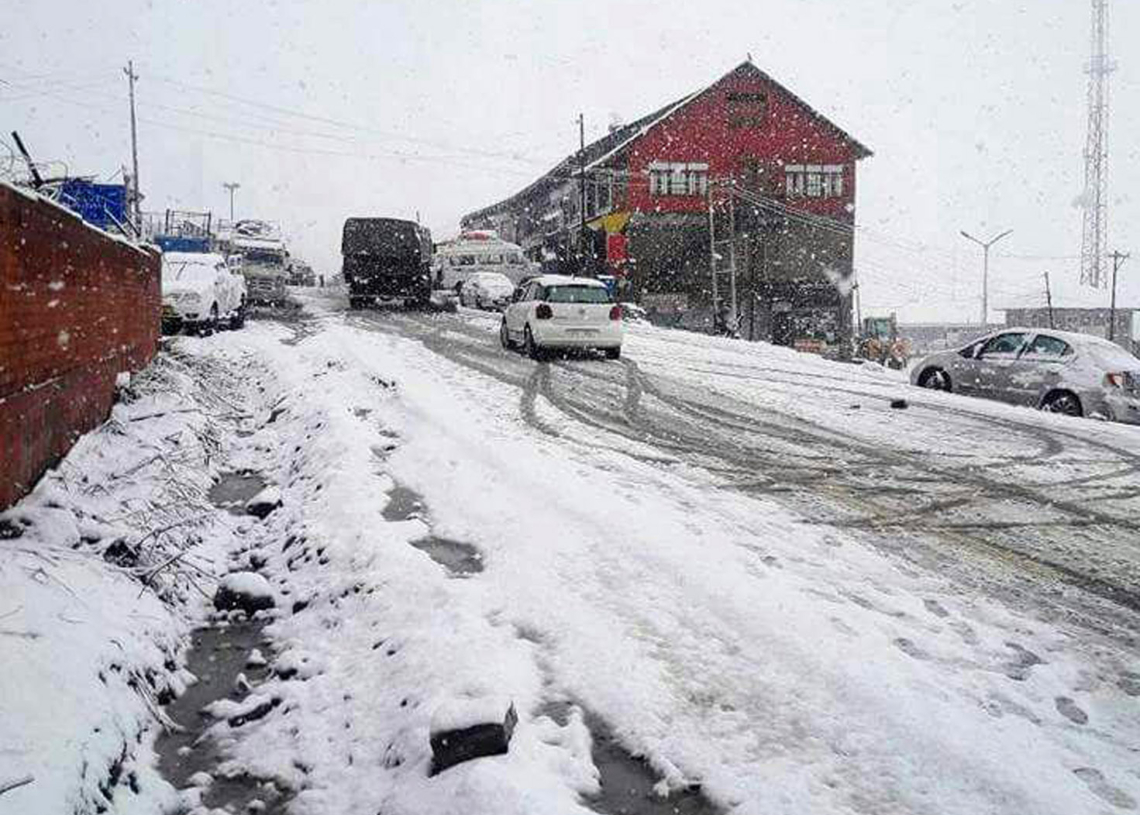 Srinagar, Apr 20: Gulmarg and other areas in the higher reaches of Kashmir received fresh snowfall on Friday, while the plains in the valley, including the summer capital Srinagar, were lashed by rains.
Fresh snowfall was recorded in Gulmarg the famous ski-resort in north Kashmir’s Baramulla district, an official of the Meteorological Department here said.
He said there are reports of snowfall in other areas in the higher reaches of the valley, including in Zojila Pass, near Amarnath Cave and Drass.
The plain areas in the valley were lashed by rains which have brought down the maximum temperature below the normal for this part of the season, the official said.
He said Srinagar recorded a maximum of 18.5 degrees Celsius yesterday, against the normal of 21.1 degrees Celsius.
The famous health resort in Sonamarg and the hills around it received around 1-inch deep snow, while Minamarg received 6-inch deep snow and Gumri got 12-inch deep snow.
Traffic on Jammu-Kargil highway has been stalled since Thursday evening due to heavy snowfall in Zojila Pass and Gumri.
Snowfall in mid-April has brought down day temperatures to 15 degree Celsius in Srinagar.
Incessant rains coupled with strong winds wreaked havoc across south Kashmir areas on Friday.
Reports said trees were uprooted at many orchards across the district including Shangus and Kokernag areas.
Over a dozen houses were partially damaged due to strong winds at Shangus, while shops were also damaged at Wangum and Hangulgund areas of Kokernag, reports said.
Reports of road blockade due to incessant rainfall coupled with strong winds have been coming in from south Kashmir. Shangus-Ranipora Mattan road and Achabal Kokernag road has been blocked, reports said.
Earlier, on Thursday hailstorm wreaked havoc across Kulgam and Shopian districts resulting into damages to orchards in the twin districts.
Similar reports of damage to orchards have been pouring in from Bijebehara area of south Kashmir and other districts.
The incessant rains also virtually turned the city into a cesspool, with streets and by-lanes at many places remaining water-logged.
The roads and by-lanes of several civil lines and old city areas are inundated thereby hindering the pedestrian as well as vehicular movement.
The areas where lanes are filled with water include: Residency Road, Maulana Azad Road, Jawahar Nagar, Mehjoor Nagar, Chanapora, Qamarwari, Bemina, Indra Nagar, Hyderpora , Hari Singh High Street, Chanapora, Rambagh, Natipora, Shivpora, Sonawar, Rainawari, Bohri Kadal, Eidgah, Nowpora, Sekidafar, and other upper and low-lying areas of the city.
In areas like Bemina, Jawahar Nagar and Indra Nagar, people had to face immense hardships to move out of their houses due to the inundated streets and by-lanes. “We have a drainage system here in some areas but it is faulty. Whenever there is a slight downpour our lane gets flooded. I don’t understand where from this water comes. This Water flow is restricting our movement,” said Bashir Ahmad, a resident of Bemina said.
Another resident from Indra Nagar said his area turns into cesspool even with slight rainfall. “We are tired of facing water logging every now and then. Nobody came here to help us. Authorities are only focussing the main city areas. We have a poor drainage system here,” said Abdul Wahid of Indra Nagar.
Though SMC claims to have started dewatering process, but many localities still remain inundated.
Meanwhile, Divisional Administration, Kashmir, has issued an avalanche warning for hilly and avalanche-prone areas of the valley and Ladakh region.
Avalanche warning exists for avalanche prone slopes of Kupwara, Bandipora, Baramulla, Anantnag, Kulgam, Budgam, Ganderbal, Kargil and Leh districts of Kashmir Division for Friday, an official of the Divisional Administration said.
He said all deputy commissioners concerned have been asked to take precautionary measures in their respective districts and advise people not to venture in avalanche-prone areas and monitor the situation regularly to avert any untoward incident.