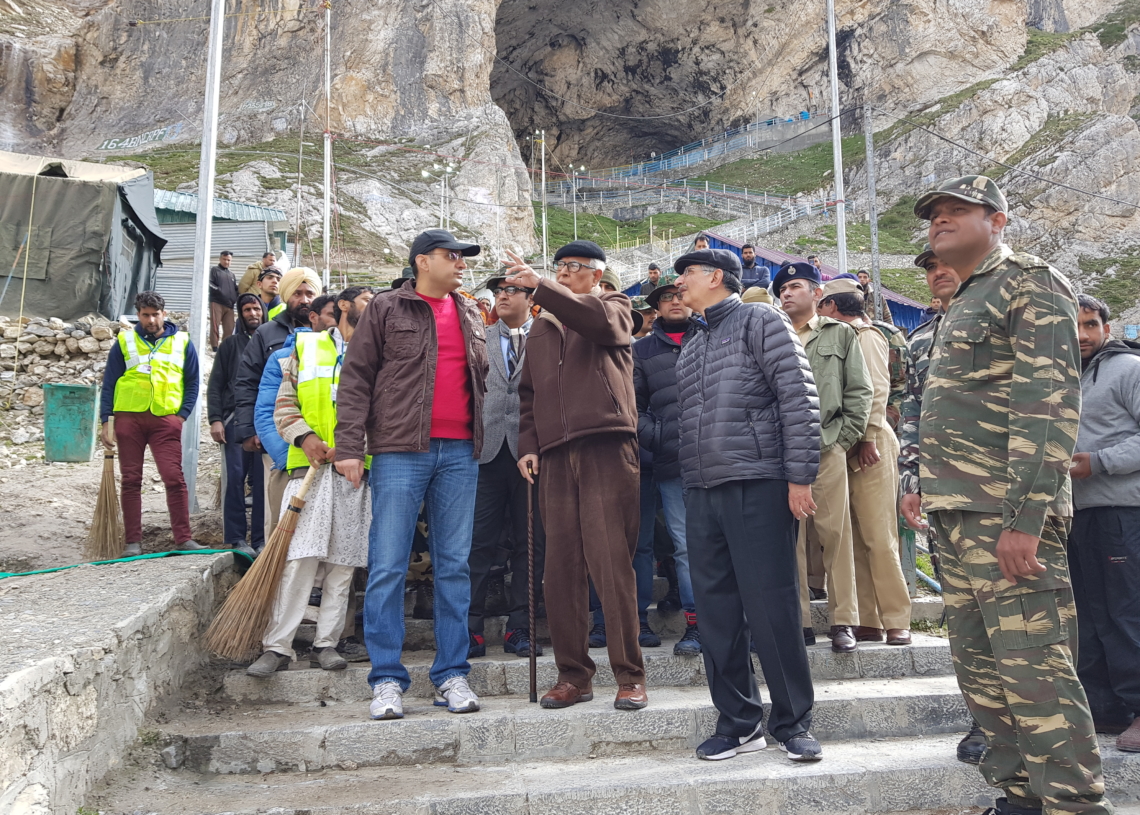 Srinagar, June 22: Governor N.N. Vohra, Chairman Shri Amarnathji Shrine Board (SASB), accompanied by Shri Umang Narula, Chief Executive Officer of the Board, visited the Holy Cave, Panjtarni, Baltal and Domel Yatra Camps and Neelgrath Helipad to review the status of arrangements for the Yatra commencing on 28th June 2018. Governor was briefed about the up-gradation of track on Baltal-Holy Cave axis, security arrangements and the facilities being established for the establishment of medical facilities, shelter sheds, langars, tents, shops, pre-fabricated huts, toilets, baths, etc. Governor had discussions with senior officers of Army, J&K Police, CRPF, BSF, ITBP, NDRF, SDRF regarding security arrangements being made on and along the track for the smooth conduct of Yatra.
Governor issued instructions to the Camp Director at Holy Cave to seek the help of Army and Para Military Security units to recce the area, particularly the slopes above the Holy Cave, to see that there were no loose stones/ boulders which could roll down and cause injuries to the pilgrims. Governor emphasized that strict monitoring of sanitation arrangements be ensured for the proper disposal of all bio-degradable and non- biodegradable wastes. Governor further directed the Camp Directors and other functionaries of the board to particularly ensure effective sanitary arrangements in respect of the functioning of toilets / bath units and, cleaning of the Camp area, thrice a day.
At the Panjtarni Base Camp, Governor inspected arrangements for supply of power, water supply, proper installation of Baths and toilets and the treatment of their out flows. He directed the Camp Director to personally supervise, daily, and ensure the sanitation of the toilets and baths and also ensure that regular doses of microbial consortium are added by the agency responsible for ensuring sanitation for effective degradation of waste.
Governor visited the Access Control Gate at Domel and reviewed the security preparations and movement plan of the Yatris with Col. Nitin Khajuria, Commanding Officer, 8 Rajputana Rifles, and Sh Ramkesh Sharma, Camp Director and Shri Prithpal Singh, Deputy Camp Director.
At the Neelgrath Helipad, Governor inspected the Waiting Hall area and other facilities created for the Yatris and directed to ensure that the toilets and wash-rooms are kept clean and hygienic at all times.
During his near day long visit to the Camps in the Yatra area, Governor held a review meeting at the Baltal Base Camp with Deputy Commissioner Ganderbal; Senior Superintendent of Police Ganderbal; concerned Divisional and District level officers and officers from the CPMFs and the State Police. He directed the Labour and Animal Husbandry Departments to ensure the proper registration of Ponies and the Pony-wallas, Dandi-wallas, Palki-wallas and the authorized strength of the Pithus (labour). Deputy Commissioner, Ganderbal was directed to ensure that laminated Photo Identity Cards are issued to all legitimate workers to see that no unauthorized person is allowed to enter the narrow tracks. The Governor also reviewed arrangements regarding the provision of safety measures at the the Baltal Base Camp, Holy Cave and Panjtarni Camps, particularly Fire and Emergency Services, making Fire Hydrants functional at Baltal and Domel, and setting up of Joint Control Rooms.
Governor directed GM (Works) to ensure that all the toilets and baths, at every Camp location, are connected to proper waste disposal systems and foolproof arrangements are made for maintaining cleanliness of toilet facilities, at all times. He further directed that the CEO, Sonamarg Development Authority, shall be responsible for making effective arrangements for the daily collection of all garbage which would then be transported to the site identified by Sonamarg Development Authority in consultation with the State Pollution Control Board Authorities.
While reviewing the arrangements for the provision of medical facilities for the pilgrims, the Governor directed the Deputy Commissioner and the Chief Medical Officer Ganderbal District to ensure that every Medical Camp is equipped with adequate medical and para-medical manpower, equipments, medicines and other requirements as per the Action Plan prepared by the State Health Department. He also directed that every Medical Centre should have proper toilet facilities and water supply.
Governor directed the Deputy Commissioner, Ganderbal to review the Disaster Management Plan for the Yatra so that the resources available with all participating agencies are pooled at designated locations along the Yatra routes to enable optimum use of all assets in case of any disaster situation.
The Governor stressed on the Police officers to ensure that all regulatory measures are most strictly enforced to ensure that every registered Yatri is enabled to cross the Access Control Gates at Baltal without any inconvenience. CAPD officials informed the Governor that adequate arrangements are being made for stocking rations, fire-wood and fuels for the coming Yatra.