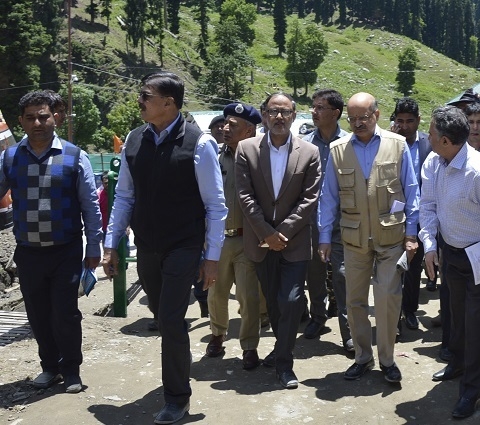 ANANTNAG, JUNE 26: The Advisor to Governor K Vijay Kumar along with Chief Secretary BVR Subrahmanyam and Director General of Police Dr S P Vaid today visited Chandanwari and Pahalgam to review the arrangements put in place for the smooth conduct of annual Amarnath Yatra commencing from June 28.
The Advisor took detailed stock of all the activities being carried out by the concerned in thus connection. He stressed on ensuring proper coordination and complete synergy among all the concerned for the successful conduct of the Yatra.
He also emphasized upon all the departments to work with added zeal and zest and directed that all facilities must be provided at transit camps, halt stations enroute the holy cave. He directed Deputy Commissioner Anantnag to submit comprehensive report by June 27 regarding Yatra arrangements.
While inspecting 20-bedded hospital at Chandanwari, the Advisor directed the health department to ensure all medical facilities including life-saving drugs, ECG and X-Ray facilities at Sheshnag also. He also directed the district administration to provide proper space for Mobile ATM Van to avoid inconvenience to Yatries.
On the occasion, the Chief Secretary directed for ensuring adequate facilities and services particularly with regard to healthcare at all the halt stations.
Later, the Advisor along with the Chief Secretary and DGP convened a meeting of the civil and police officers at Pahalgam Club regarding Yatra arrangements.
They took stock of the facilities including water supply, sanitation, power supply, roads, communication, public address system, health and other services.
Deputy Commissioner Anantnag Mohammad Younis Malik gave a detailed presentation regarding the arrangements put in place for the smooth conduct of the Yatra. He informed that sanitation facilities through community sanitary complexes are being provided. He further added that all arrangements have been made for the facilitation of the Yatries. Construction of railing at vulnerable spots including Pishutop, Nagakooti, Wav ball top, SS Pari and double path at Nagakooti has been completed as per the high powered committee decisions constituted last year. The steel deck bridges at the identified places have also been installed.
Among others, the meeting was attended by SSP Anantnag, ADC Anantnag, Camp Director, CEO PDA, SDM Pahalgam, SEs of R&B, PHE, PDD, Exen PMGSY and other district officers besides officers from Army, BSF and CRPF.