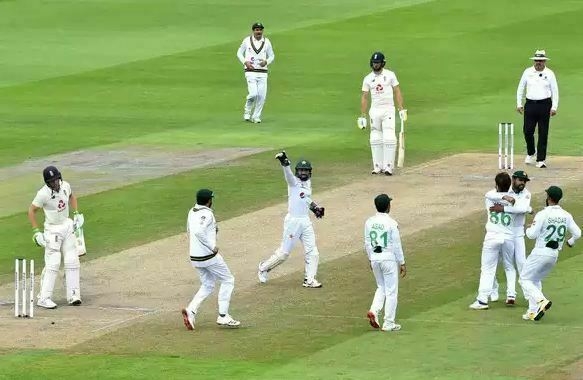 Manchester: England bowlers struck early in Pakistan’s second innings after the visitors took a huge first innings lead in the second session of Day 3 of the first Test at Old Trafford in Manchester on Friday. Azhar Ali and his troops are firmly in the driver’s seat as they lead by 219 runs with five wickets down.

Jos Buttler and Chris Woakes resumed the hosts’ innings after Lunch and the wicket-keeper batsman fell straightaway to Yasir Shah without adding a single run to his score. He was comprehensively castled for 38.

Dominic Bess was the next to depart as he became Yasir Shah’s third wicket of the innings for 1. Few overs later, Yasir struck again and this time Woakes was clean bowled for 19.

Broad then slammed three consecutive boundaries in one Shaheen Afridi over, adding crucial runs to the England total. His partner Jofra Archer, however, couldn’t last long as he was dismissed by Shadab Khan for 16.

Broad continued to hit boundaries on the other end as this time he hit a six and four off Yasir. But he soon ran out of partners as James Anderson was dismissed LBW by Shadab for 7.

England folded in their first innings for 219, conceding a 117-run lead. Yasir was the pick of Pakistan bowlers and he ended with a four-wicket haul. Mohammad Abbas and Shadab scalped two each for the visitors.

Pakistan, however, were stunned early in their second innings as Broad got rid of first innings centurion Shan Masood for 0.

In the 3rd session of the day, Shadab Khan and Mohammad Rizwan were at the crease.