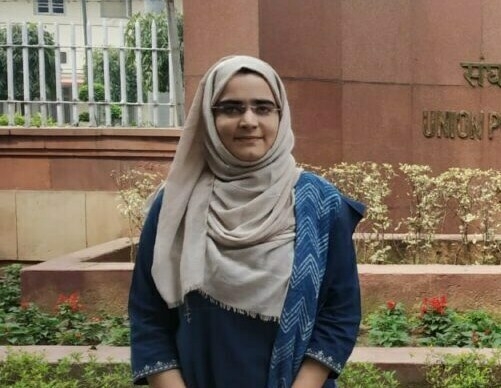 Kupwara, Aug 9: Last Tuesday was probably the most important day in the life of Nadia Beig. At 23, Nadia cracked Civil Services 2019 managing an impressive all-India rank of 350 in one of the toughest multi-tier exams in the country attempted by thousands each year.

A Jamia Millia graduate from the frontier Kupwara district in north Kashmir, Nadia qualified the exhaustive examination in her second attempt to become one of the youngest Civil Servants from Jammu and Kashmir.

Though she was not among the top 100, achieving the rank she has at an all India level is no mean feat.

A resident of Punzwa village, her journey to Jamia Millia was an outcome of her father’s visit to the prestigious university in Delhi in the 1990s with one of his friend who now lives in Canada.

“I went to Jamia Millia Islamia in the ’90s and found it very safe and its students very bright. That day I decided to send my children to Jamia for higher studies. Allah turned my wishes true and I sent my eldest son and Nadia to the University for Higher Studies,” said Ghulam Mohammad Beig, Nadia’s father.

At Jamia, Nadia graduated with an honours in Economics. The university not just gave her the degree, but it also helped her tremendously to see her dream through as her name figured in the final results announced earlier this week.

“Sociology interested me more than economics and I decided to appear in CSE with Sociology as a subject,” she said.

In 2018, when she first sat for it, she couldn’t even clear the preliminary phase.

Her parents, who work in the Education department, supported Nadia throughout this tough but important phase of life.

Nadia pointed out the lack of support from Government of Jammu and Kashmir to Civil Service aspirants, who, she said, could do great if they receive the right guidance and help while preparing for top competitive exams.

“I have many friends from different states of India who have been preparing for many top-level exams for years. They all are being supported by their respective state governments through scholarships,” she said.

Nadia feels for the aspirants of Jammu and Kashmir who are bereft of even high-speed internet for over a year now.

“If students and aspirants get all the facilities they need to prepare, hardly anyone would leave Jammu and Kashmir,” she said.

“But, unfortunately, we are lacking such facilities here. I wouldn’t have even dreamt of going for Civil Series if I had been in Kashmir as one cannot imagine competing at an all-India level when you are not provided with a suitable atmosphere and facilities. Internet blockade and situation in Kashmir ultimately take a heavy toll on your studies and overall preparation,” said Nadia.

Preparing for Civil Services, according to her, affects the social life of a person for some time.

“I met my Nani (Grandmother) after many years, as I would hardly visit home once a year. One has to dedicate his time and be committed with his or her dream of qualifying the exam,” she said.

“I didn’t give up after my first attempt and that is the most important factor (in her success),” she said.

Nadia thanked her teachers, parents, and especially her brother “who stood by me and motivated me to follow the dream.”

Her father, a known teacher in his area, said: “Whenever I would go to the market I would bring books, magazines, newspapers for my children. I would motivate them to do something big so that they would be of some help to the people of Jammu and Kashmir.”

He was sure about her daughter’s success so much so that he had made all the arrangements at home to celebrate it.

(Pirzada Shakir is young freelance Journalist based in Kashmir. He tweets @pzshakir6)