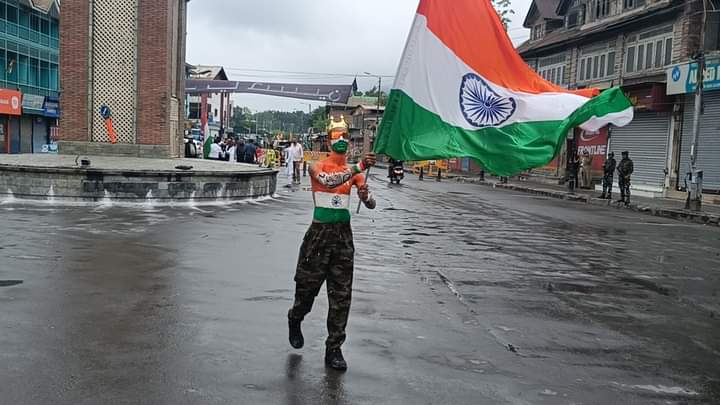 Srinagar: Arun is an avid fan of the Indian cricket team and can be seen cheering up the players during matches in Ahmedabad, Gujrat.

He can also be spotted at the Republic Day functions in New Delhi but during Monday’s Independence Day celebrations, Arun chose to wave the Indian tricolor at the Ghanta Ghar here in Lal Chowk.

On a day when Kashmir witnessed several unique events ranging from the display of a 7500 sq ft tricolor at the Dal Lake to thematic celebrations at the Dachigam National Park to celebrate the 75th anniversary of India’s independence, Arun’s appearance at Ghanta Ghar still attracted eyeballs on social media.

With the colors of the national flag painted on his body besides tattoos covering his forehead and back, Arun said he had come to Kashmir with a message of peace and brotherhood.

“Usually I go to Delhi on January 26 and I also cheer for the cricket players at every match played in Ahmedabad. Since the entire country is celebrating ‘Azadi Ka Amrit Mahotsav’, I thought of coming to Lal Chowk. I came here for the first time and my aim is to give a message of peace and brotherhood,” Arun told reporters.

He said he was overwhelmed by the response during his Kashmir visit. “I came here last night and I got a lot of support and love from the locals as well as tourists. Many came to click selfies with me. It has been a nice experience so far,” he said.

Arun, who was seen wearing a crown and big glasses besides waving the national flag, said two of his tattoos were permanent.