Who is Nusrat Ghani? UK MP claims she was sacked due to Muslim faith 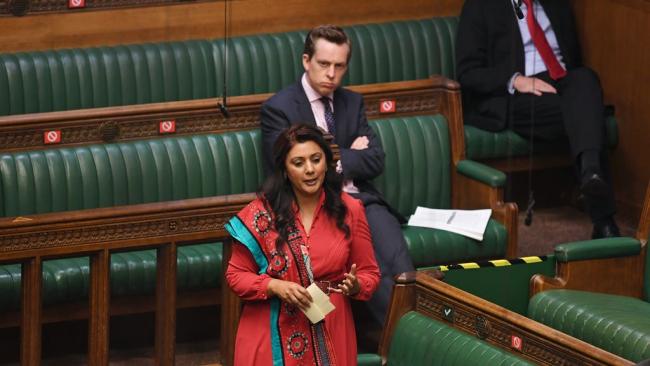 British minister Nadhim Zahawi on Sunday urged a probe into claims by a fellow Conservative MP that she lost her ministerial role because of her ‘Muslimness’, piling further pressure on the government.

Nusrat Ghani, 49, was sacked as a transport minister in 2020, and told the Sunday Times that a whip said her “Muslimness was raised as an issue” at a meeting in Downing Street.

She was also told her “Muslim woman minister status was making colleagues feel uncomfortable”, she claimed.

Chief whip Mark Spencer, whose role it is to keep MPs on board with the government’s agenda, took the unusual step of identifying himself as the person at the centre of the claims, and denied the allegations.

“These accusations are completely false and I consider them to be defamatory,” he wrote on Twitter.

“I have never used those words attributed to me. It is disappointing that when this issue was raised before Ms Ghani declined to refer the matter to the Conservative Party for a formal investigation,” he added.

The government whips are in the spotlight at the moment after they were accused by Tory MP William Wragg of “blackmailing” critics of under-fire Prime Minister Boris Johnson in order to prevent them from trying to oust him.

Ghani, vice-chairwoman of the influential 1922 Committee of Tory backbenchers, told the paper that “it was like being punched in the stomach. I felt humiliated and powerless.”

She said she remained quiet for fear of being “ostracised by colleagues”.

“There is no place for Islamophobia or any form of racism in our @Conservatives party,” he tweeted, calling Ghani a “friend, a colleague & a brilliant parliamentarian.”

“This has to be investigated properly & racism rooted out.”https://imasdk.googleapis.com/js/core/bridge3.495.1_en.html#goog_1753292741Play VideoRobot bartender serves Olympic cocktails in BeijingA robotic arm is serving up enticing elixirs to visitors of the Main Media Center on the grounds of the 2022 Beijing Olympics.

Justice minister Dominic Raab called it a “very serious claim” but told BBC’s “Sunday Morning” that there would only likely be an investigation if Ghani made a formal complaint, which she has so far not done.

Former equality and human rights commissioner Swaran Singh carried out an inquiry into claims of Islamophobia in the Conservative Party two years ago.

He analysed 727 separate incidents as recorded between 2015 and 2020 and found no evidence of “institutional Islamophobia”, but criticised senior Tory figures including now prime minister Johnson.

Who is Nusrat Ghani

Ghani was appointed assistant whip and transport minister in 2018 under former Prime Minister Theresa May.

She was the first female Muslim to speak from the Commons dispatch box. At the time, then-Transport Secretary Chris Grayling told the BBC her promotion showed the Conservatives “were a party of opportunity”.

“We’re the party to provide… the first Muslim woman minister to speak from the government dispatch box – the member for Wealden,” he said.

Ghani wrote on her website: “A century after women got the vote for the first time, I hope that today young people can see that regardless of their background, faith, race, gender or sexuality, there will be a warm welcome on the green benches, and no matter where you are from you can achieve your dreams and ambitions.”

In 2020, when Ghani was removed from the role, she was replaced by Kelly Tolhurst.

Ghani has said that she was surprised at the demotion, and the shuffle was reported in that light given she had been tipped to oversee the High Speed Two.

Ghani is a steering committee member of the backbench Covid Recovery Group who opposed the December 2020 lockdown and have voted against other Covid restrictions.