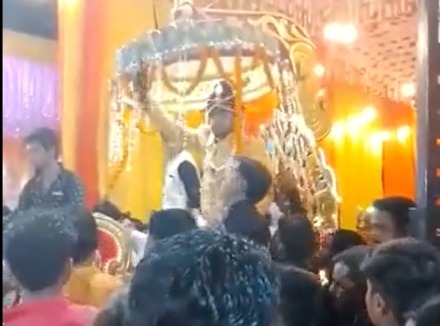 An incident has been reported from UP’s Sonbhadra where a groom accidently shot at his friend in celebratory firing, resulting in latter’s death. The video of the incident was recorded on camera.

The groom was handed over a pistol by his friend Babu Lal Yadav, an Army soldier, and wished him to fire it in air. Manish Madheshia loaded the pistol and tried to shoot in air but the firearm got stuck in the attempt. While Manish tried to fix the glitch pointing the gun downwards, it accidently shot towards Yadav. The gun used by the groom belonged to Yadav.

The video has been shared on Twitter by a user, Piyush Rai.

The victim was rushed to hospital soon after the incident but he succumbed to his injury during treatment.

Sonbhadra SP confirmed the incident and an FIR has been registered against the groom after a complaint was registered by victim’s kin. The gun used in firing has also been seized.