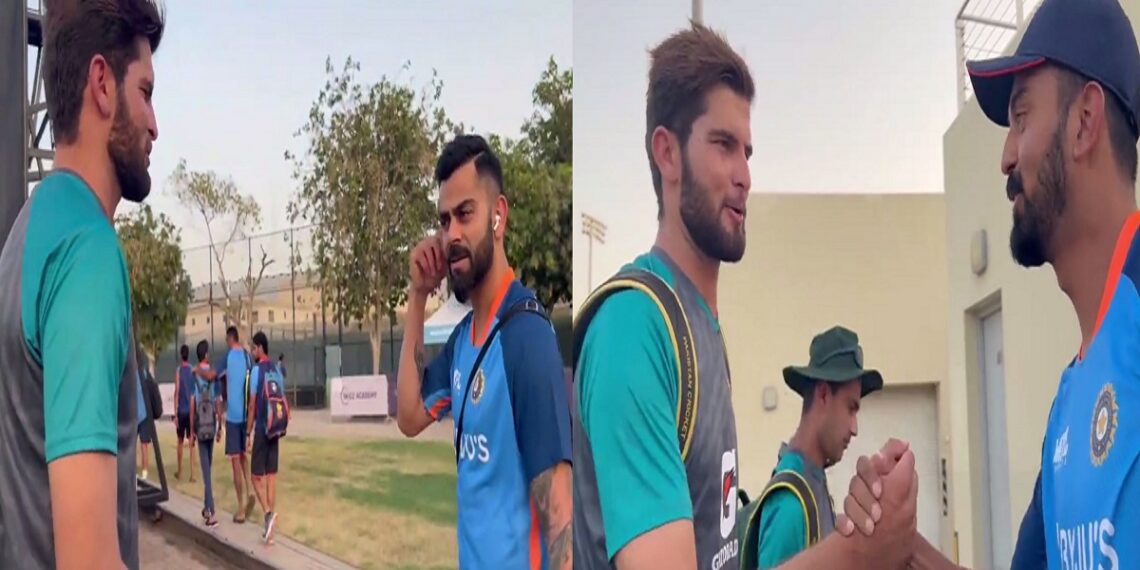 India are set to take on Pakistan in their opening fixture of the Asia Cup 2022 on Sunday (August 28). While the fans can’t wait for the intense contest between the Asian giants, a moment of sportsmanship was witnessed by both the players of both sides.

BCCI shared a video on Wednesday (August 24), where Virat Kohli was seen catching up with Babar Azam and the next day, he was seen meeting the injured pacer who caused trouble to the Men in Blue side in the T20 World Cup 2021 in the recent India vs Pakistan clash, Shaheen Shah Afridi.

Although, Afridi is ruled out of the clash, he still travelled with the Men in Green squad in Dubai as the medical staff are monitoring him ahead the T20 World Cup 2022 in Australia later this year.

Check out the video here:

In the video, Shaheen Shah Afridi was seen interacting with India’s Yuzvendra Chahal, Virat Kohli, Rishabh Pant and KL Rahul, who recently got back into side recovering from his own injury problems. All the players were seen wishing him good luck for his recovery ahead the tournament. Shaheen was also heard saying “World Cup” to KL Rahul in the video, as the batter and fast bowler had a chat for a few minutes.

The 22-year-old left-arm pacer’s injury is a major blow for the Pakistan side, especially ahead of the clash of India vs Pakistan in the opener of the Asia Cup as he was on top of his game against the same side last year in the T20 World Cup.

Former India captain Virat Kohli is on a comeback trail after giving the West Indies and Zimbabwe series a miss and taking a month-long break to rejuvenate. His next assignment will be an explosive Asian Cup 2022 opener between India and Pakistan, which will also be Kohli’s 100th T20I match.