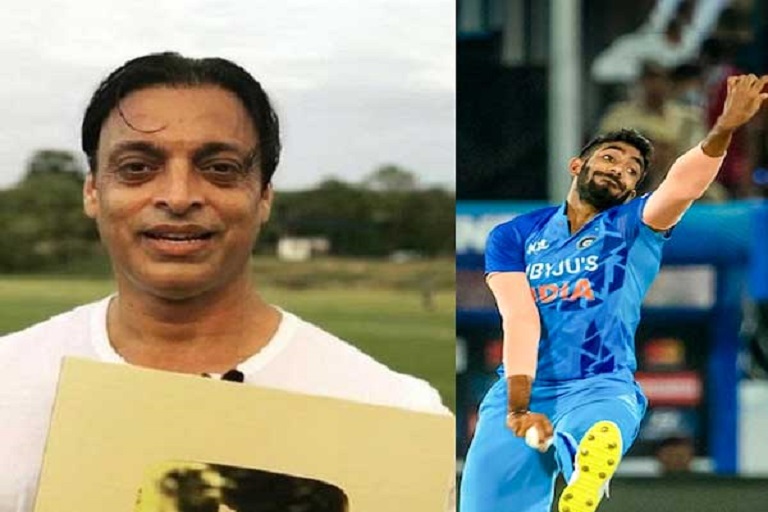 Shoaib Akhtar on Bumrah: Ahead of the T20 World Cup starting in Australia next month, India have been dealt with a huge blow with pace spearhead Jasprit Bumrah to be ruled out of the showpiece event due to back stress fracture.

Earlier, before the first T20I between India and South Africa at Thiruvananthapuram, the Board of Control for Cricket in India (BCCI) had said that Bumrah was ruled out of Wednesday’s match after complaining of back pain during practice session on Tuesday.

“Jasprit Bumrah complained of back pain during India’s practice session on Tuesday. The BCCI Medical Team assessed him. He is ruled out of the first T20I,” BCCI had said in its statement on Twitter.

But, now a report in Insidesport says that the medical team will take a call on Bumrah’s availability for the T20 World Cup, who could be out for four to six months even without the need of surgery.

“It’s concerning. But we haven’t had a full medical report on Jasprit yet. As soon as he complained of back pain, he was taken off practice. The medical team is monitoring him. Back injuries are tricky and we do not want to rush his return. The doctors will take a call on what will be his recovery period,” a senior BCCI official was quoted as saying in the report.

Amid this an old video of Pakistan fast bowling legend Shoaib Akhtar is gaining traction where he predicted that Bumrah will face back issues due to his ‘frontal bowling action’.

“Bowlers with frontal bowling action use their back and shoulders to generate pace. Mine was a side-on – which compensated (for the pressure exerted on back). Remember, when a bowler with a frontal action encounters back trouble, try as hard you may but it will never leave you alone (once it starts troubling). Ian Bishop, Shane Bond, Brumah – all frontal bowlers encountered this issue,” Akhtar said on Sports Tak.

Akhtar’s career was also plagued by injuries that severely hampered his progress. The fast bowling legend has advised the Indian team management to look after Bumrah and not play him in every match/format.

“Bumrah now has to think about this – he played a match, took off, recuperate, went into rehabilitation. Now, he will have to be managed well. You cannot risk him anymore – he will break down if you play him in all matches. Play him three matches and give him rest,” Akhtar said.

Bumrah, who was out of international cricket since July this year, had missed the T20 Asia Cup in the UAE due to back injury, for which he underwent rehabilitation at the National Cricket Academy (NCA).

He was then declared fit for the three-match T20I series against Australia at home. In the series, he didn’t play the first game at Mohali, but featured in matches at Nagpur and Hyderabad.

The report added that the same back injury which had kept Bumrah out of the Asia Cup has aggravated into a back stress fracture. “Bumrah is expected to head to London for better treatment next month. If he requires surgery, he could miss more than six months of action.”