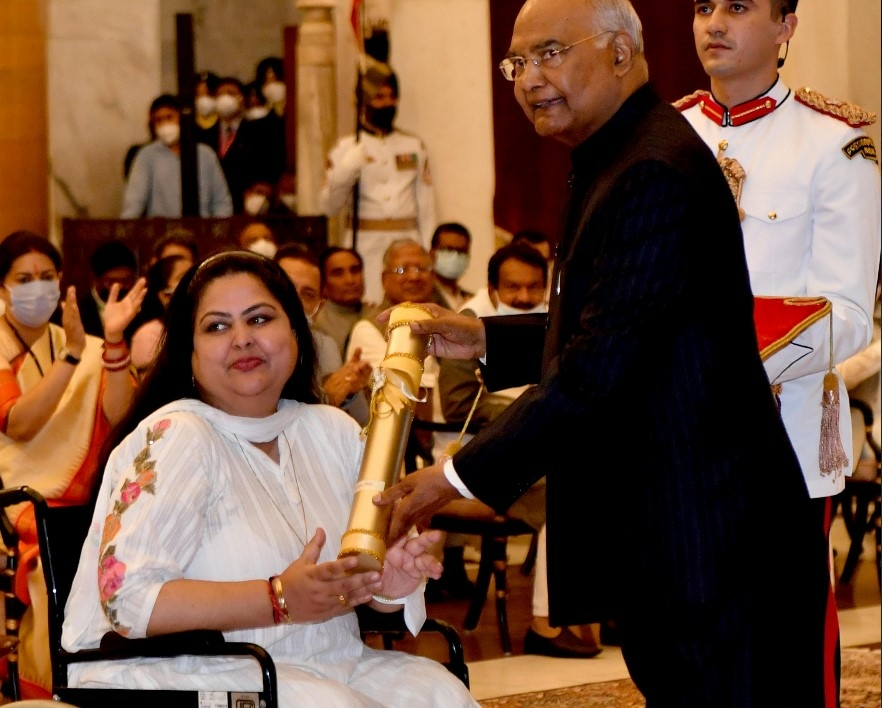 Srinagar: Grass root innovator Nasira Akhter from South Kashmir’s Kulgam district had discovered a herb in 2008 that can convert polythene to ashes without causing any harm to the environment. And Sandhya Dhar from Jammu has been working for the underprivileged for the past 25 years despite having been confined to a wheelchair.

Both the women had remained unsung heroes in Jammu and Kashmir till they received the ‘Nari Shakti’ from the President of India Ram Nath Kovind on Tuesday.

Dhar, who received a rousing reception on her arrival in Jammu, said she was glad that her contribution had finally been recognised by the centre.

“I want to thank the central government for recognizing my work. Though I founded the ‘Jammu Institute of General Education and Rehabilitation’ in 2015, I have been working for the underprivileged for the past 25 years. Getting the award from the president was an honour. We met the prime minister (Narendra Modi) too and had interaction for one and a half hours. Everybody was given five minutes each to speak. Everything was wonderful,” Dhar told reporters on her arrival.

Earlier, the President had conferred the ‘Nari Shakti Puraskars’ to 29 outstanding Individuals for the years 2020 and 2021.

Sandhya Dhar was awarded for her ‘contribution and dedication towards divyangjan rights’. She founded the ‘Jammu Institute of General Education and Rehabilitation’ in 2015 that conducts classes for ‘divyangjan’ and underprivileged children.

Nasira Akhter was awarded for her grassroots innovation in environmental conservation. She had discovered a herb that converts polythene to ashes, thereby making polythene biodegradable.

She too said she was glad after receiving the award and was waiting for the day when her product will be available in the markets.

“I am happy after receiving the award. But, I will be happier when my innovation will be available in the markets and benefit the people as well as the environment,” she told reporters.

Interestingly, her innovation has been recognised by the Asia Book of Records as well as other records books.

“Nasira Akhter (born on February 1, 1972) of Jammu & Kashmir, India, set a record for discovering a herb & NPL which is used to convert polythene to ashes without causing any kind of environmental pollution. She took 8 years, 7 months and 5 days (from October 1, 1999, to May 6, 2008) to discover this method. The paste of this herb is applied on the mounds of polythene when it is burnt, as confirmed on July 4, 2020.” states the portal of the Asia Book of Records.

Padma Yangchan from Ladakh too was among the 29 awardees and she was honoured for preserving and reviving the lost cuisine and hand-weaving techniques of the region.