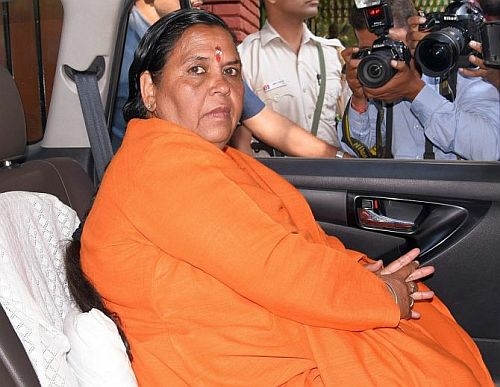 New Delhi : Uma Bharti, Bharatiya Janata Party national vice-president, was admitted to AIIMS, Rishikesh, after testing positive for the novel coronavirus. She also complained of a high fever on Sunday night.
In a series of tweets since Sunday, Bharti said that she tested positive for the Covid-19 on Sunday after returning from the Himalayas.
“My relatives and well-wishers are worrying a lot about me after they got to know that I was tested positive for the coronavirus…,” she said in a Hindi tweet on Sunday.
On Monday she tweeted that if the AIIMS authorities allow her, then she would like to appear in the special CBI court of Lucknow on Wednesday when it is likely to pronounce the verdict in the 1992 Babri Masjid demolition case.
“I have just been admitted to AIIMS, Rishikesh. There are three reasons: Dr Harshvardhan is worried for me; I got a high fever at (Sunday) night; and if I get a positive nod from the AIIMS after tests, then I would like to appear in the CBI court of Lucknow the day after tomorrow,” she tweeted.
Urging the media not to blame the Himalayan saints, Bharti revealed that her driver had the coronavirus, but they were unaware of it till he was tested positive for COVID-19.
“News is doing rounds in the media that I contracted the coronavirus from the saints in the Himalayas. I deny it…,” she tweeted.