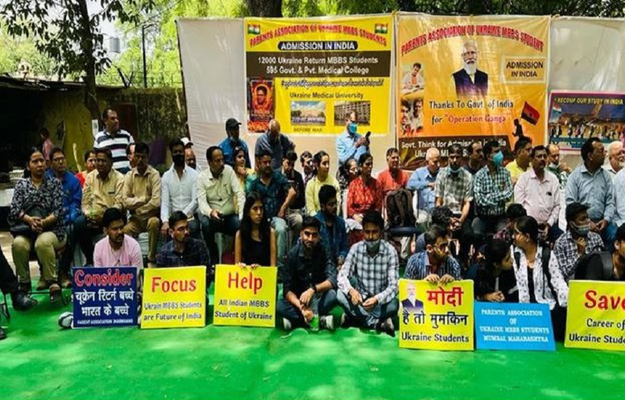 New Delhi: The students who were evacuated from war-torn Ukraine and their parents gathered at Jantar Mantar here on Sunday and sought the government’s intervention to ensure they are accommodated in Indian colleges. The students held placards that read: “Help all Indian MBBS students of Ukraine” and “Save the career of Indian students”.

Thousands of students from India studying in various medical colleges in Ukraine had to abandon their courses and return home after Russian forces launched an offensive against the country.

Last month, a PIL was filed in the Supreme Court seeking directions on the issue of admission and continuation of studies in the country of Indian medical students who were evacuated from Ukraine.

The plea also sought directions to the Centre to provide a medical subject equivalency orientation programme for admitting them in the Indian curriculum. The Indian Medical Association has also recommended to Prime Minister Narendra Modi that such students should be accommodated in Indian medical colleges as a one-time measure.

In a letter to PM Modi on March 4, the IMA had said that such students should be permitted to go to Indian medical colleges for the remainder of their MBBS courses through an “appropriate disbursed distribution”, but it should not be seen as an increase in the annual intake capacity.