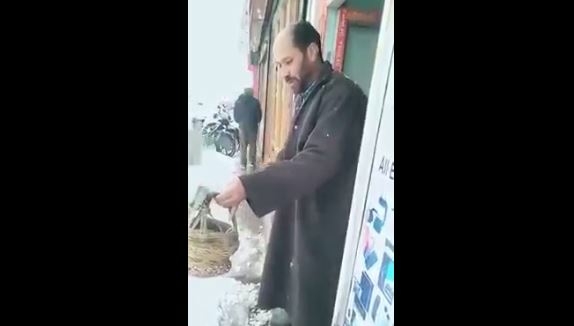 Winters have once again knocked on our doors early this year as heavy rains and snow have disrupted normal life in Kashmir.

The valley is seeing rains and snow in several parts since last night due to which the temperature has dipped several notches below normal.

At the same time, the roads are seeing very thin movement, more so because potholes have really made moving out a tough task.

In the middle of it, people have started looking for their beloved Kangris, the ultimate winter gear that most Kashmiris bank upon to fight the tough weather.

A video of a person dusting his old Kangri while singing ‘tu mujhe qubool, main tujhe qubool‘ from the famous Bollywood flick ‘Khuda Gawah’ is going viral on social media.

“Shabir saeb, what do you have to say about it?” asks the one who is shooting the video to the man holding his Kangri as the snow begins.

To which he replies singing: “I have told it I accept you and you accept me. Now it will stay with me till June. Neither would it leave us nor would we leave it. It is loyal to us and we are loyal to it.”

Kangri is indeed the best way to fight tough winters in Kashmir as it does not need any electricity (which we badly miss during snowy days) to warm us up.