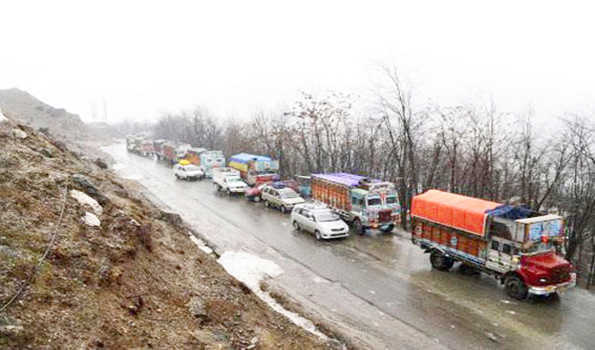 Srinagar: Traffic was on Wednesday resumed on the national highway, the only all weather road connecting Kashmir valley with the rest of the country, after remaining suspended on Tuesday due to landslides triggered by rain.

We have allowed traffic on the highway and vehicles will ply from Srinagar to Jammu today, a traffic police official said.

Meanwhile, the national highway, the only road linking Union Territory (UT) of Ladakh with Kashmir and historic 86-km-long Mughal road and Anantnag-Kishtwar road remained closed due to accumulation of snow.

Earlier, the traffic department had Tuesday night announced that in view of inclement weather prediction issued by the Met department for next few days which could cause landslides, no vehicular traffic will be allowed from Jammu or Srinagar on Wednesday.

However, there is improvement in the weather and road condition is good, one-way traffic from Srinagar to Jammu was allowed today, he said.

Due to landslides, triggered by rain at Magarkote near Ramsu, traffic on the highway was suspended on Tuesday. However, he said, the National Authority of India (NHAI) pressed into service sophisticated machines and put through the traffic.

However, the 434-km-long Srinagar-Leh national highway remained closed since January Ist, 2021 due to accumulation of snow and slippery road conditions, particularly at Zojila pass.

Intermittent fresh snowfall and avalanches have hampered early reopening of the road which was put through in the last week of February only to be closed again due to fresh snowfall after few hours. There were fresh avalanches and snow in March.

The Mughal road, seen as alternative to Srinagar-Jammu national highway, also remained closed since December last year due to accumulation of snow. However, massive snow clearance operation is going on to put through the road which connects Shopian in south Kashmir with Rajouri and Poonch in Jammu region.