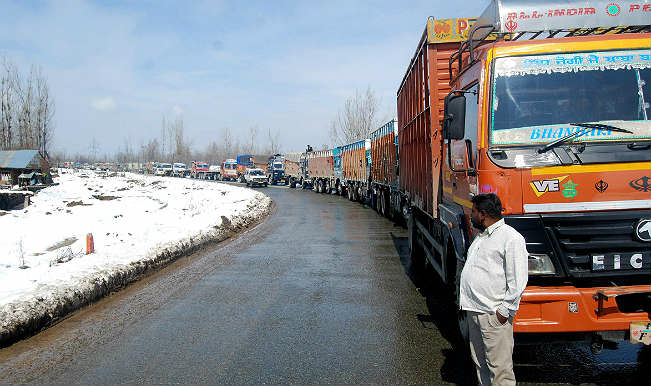 SRINAGAR: One-way traffic was on Sunday restored after remaining suspended for a day due to shooting stones and fresh snowfall on Srinagar-Jammu national highway, connecting Kashmir valley with the resort of the country.
Snow clearance operation was going on a war-footing to restore traffic on the 434-km-long Srinagar-Leh national highway, the only road linking Union Territory (UT) of Ladakh with Kashmir, which remained closed for the past over two months due to accumulation of snow.

”Fresh one-way traffic was on Sunday allowed to move from Jammu to Srinagar after clearing vehicles which were stranded on Saturday,” a traffic official said.
He said traffic was suspended on Saturday afternoon due to fresh landslides at Cafeteria Mode in Ramban area and fresh snowfall on the highway. Hundreds of vehicles, including those carrying passengers and trucks loaded with essentials, were stranded on the highway.
However, he said the National Highway Authority of India (NHAI), responsible for maintenance and widening of the highway, pressed into service sophisticated machines and men to clear the landslides. ”After clearing the landslides, stranded vehicles were allowed to move towards Srinagar,” he said, adding fresh traffic was later allowed to move from Jammu to Kashmir.
The 86-km-long historic Mughal road, connecting Shopian in south Kashmir with Rajouri and Poonch in Jammu region and Anantnag-Kishtwar road also remained closed due to accumulation of snow for the past over two months.

Army Officer dies while trying to save his dog from fire