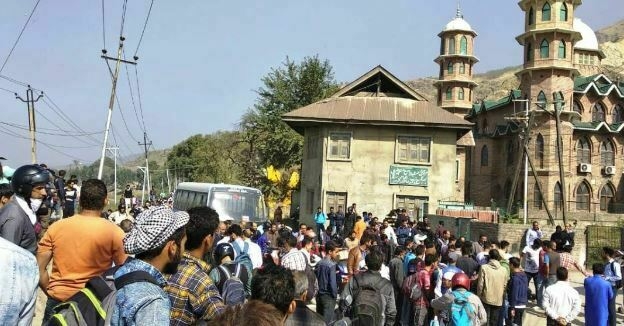 Srinagar, Oct 01: Traffic on Monday comes to halt after the stone quarry holders on Monday took to streets in Pantha Chowk area here to protest against the government for banning the quarry activities since long.
Hundreds of vehicles were seen stranded on the road after the protesters took to the streets to press for the demands of revocation of ban on quarry activities in the area.
Soon after the stone quarry holders assembled on the main road and blocked it, thus leading to traffic chaos in the area, leading to sufferings of commuters.
The quarry holders including men and women were carrying banners and chanted slogans in favour of their demands.
Protesting quarry holders said that the government by banning the quarrying activities has left hundreds of people to starvation. “Ban in the stone quarrying activities has rendered hundreds of people jobless,” they said, adding that it was their sole source of earning bread.
They said that since the government ordered ban, they are facing tremendous hardships. “The state administration must look into the matter and should reconsider their decision. We hope that Governor Satya Pal Malik led administration won’t ignore our plights and will revoke the ban soon,” he said.
Meanwhile, police resorted to tear gas shelling to disperse quarry holders who were on roads to press for their demands.
Reports said that policemen lobbed scores of tear gas canisters to disperse the protesters.