Thumping victory of DDC candidates shows how deep-rooted NC is across J&K: Farooq 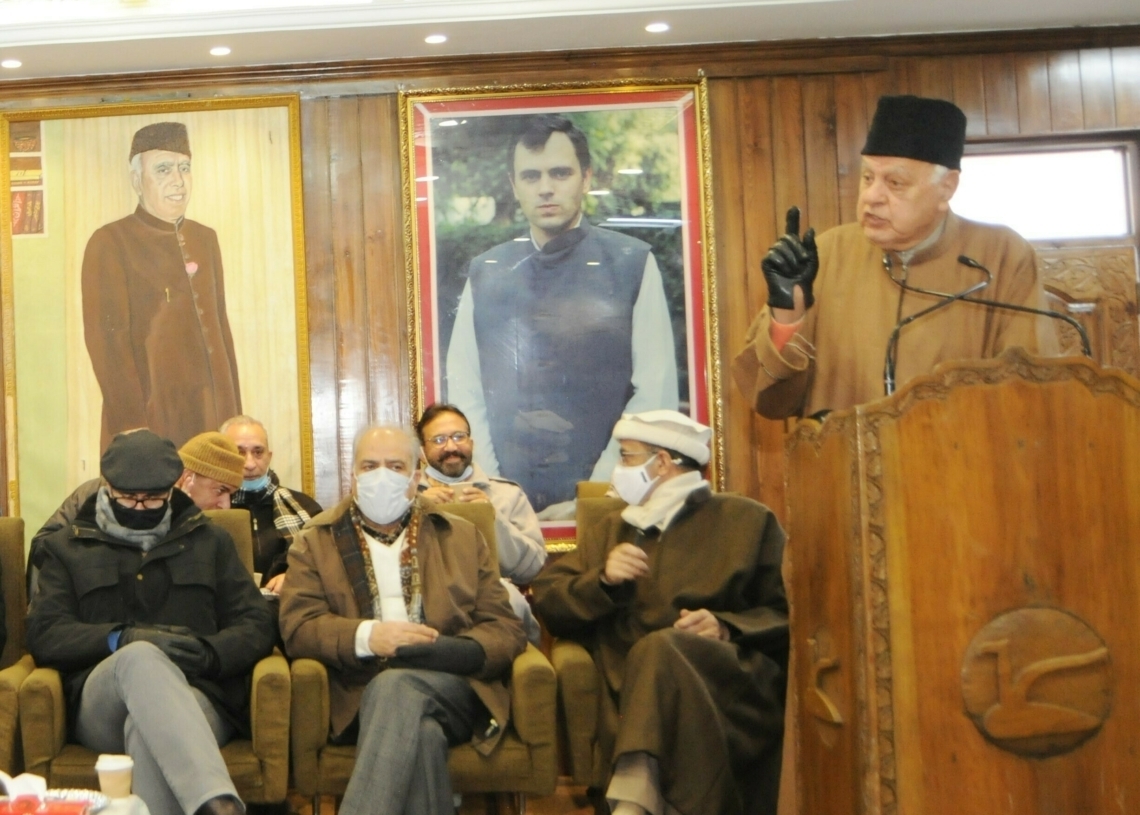 Srinagar: The Jammu and Kashmir National Conference Party President and Member of Parliament from Srinagar Dr Farooq Abdullah on Tuesday felicitated the Party’s winning candidates for their resounding victory in the District Development Council elections attributing the victory to the resilience of people of J&K.

Lauding the resilience of party workers and party functionaries here at a felicitation function held at party headquarters, Party President said that the thumping victory of the Party’s DDC candidates bear out how widespread the roots of party  are across Jammu and Kashmir.  He said it was the ideological congruence with socio-political and economic emancipation of the poor at its core that helped the party to withstand the hostile and challenging times.

The Party, he said, has endured its character by working for the poor and destitute to iron out social and economic disparity in Kashmir by making recurring drastic and pro poor contributions  in all areas from time to time.

While expressing gratitude to the people for their overwhelming support to the National Conference, the Party President said the people have done their bid and that now it was the turn of elected DDC members to pay off by rising up to the expectations of people with pure and simple service motive.

“I am hopeful that the Party’s DDC members will devise an all inclusive strategy to serve people, address their concerns and become a voice for the voiceless. We in our party have always upheld that people are the real source of power; therefore it is more binding for our elected DDC members to keep in touch with their constituents. Unfortunately we have lost half a decade since 2015,  now I am hopeful that the newly elected DDC, keeping up with the party agenda will make most of the bottom-up style of development envisioned and introduced by Sher e Kashmir and work day in, day out to make a discernible difference  in people’s lives,” he said.

Extolling the functionaries and workers to heap on their public outreach Party President said that there was no scope for resting as the forthcoming days and months would be equally challenging.

“We saw how brazenly the administration discriminated against our contesting candidates and created hurdles to impede our public outreach by flaunting all democratic norms. The anti democratic forces will again contrive to rein in and encumber our efforts underway for the restoration of people’s rights.  However our workers and functionaries withstood all sorts of difficulties on their own with no support coming from any quarter. I am hopeful that the party rank and file will keep up with the resolute behavior.  Unity holds the key to success. In the days our detractors will employ all sorts of enticements, coercion and intimidation to break our unity.  We on our behalf have to strengthen our rows against their machination and face the challenges ahead of us resolutely,” he added.

On the occasion Party leadership also felicitated Salman Ali Sagar for his victory in ULB by-polls of Sringar SMC and hoped that his presence in the SMC will give pre-eminence to development issues in the corporation.