Thousands attend funeral of local soldier, his father in Tral 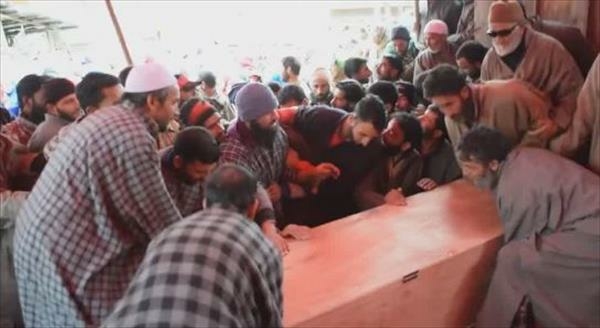 Tral, Feb 13: Thousands of mourners participated in the last rites of slain local soldier and his father in restive Tral town of South Kashmir’s Pulwama district.
Lance Naik Muhammad Iqbal Sheikh and his father Ghulam Mohiuddin Sheikh were killed in a militant attack at Sanjuwan Army Station, 11 kilometers from Jammu town on Saturday.
The bodies of father and son were airlifted from Snajuwan to Badamibagh Army Headquarters Srinagar where army paid floral tributes to the soldier. The relatives collected the bodies later on from police station Tral.
Thousands of mourners gathered at their Nigeenpora native village and participated in their last rites.
The soldier Muhammad Iqbal Sheikh was affiliated with Jammu Kashmir Light Infantry who had joined the Force 12 years ago.
His father, wife and son had gone to Sanjuwan Army Station a couple of days ago to meet him. When heavily armed militants struck at the Station, Sheikh was one among the six soldiers killed in the assault while his father also died in the attack.
“He was a gentleman and it is our obligation to bid him adieu,” said an elderly person to expressing sympathies with the bereaved family.
The soldier is survived by his wife and a son, three sisters, a brother and mother.

Pottery a dying art as potters turn to other professions