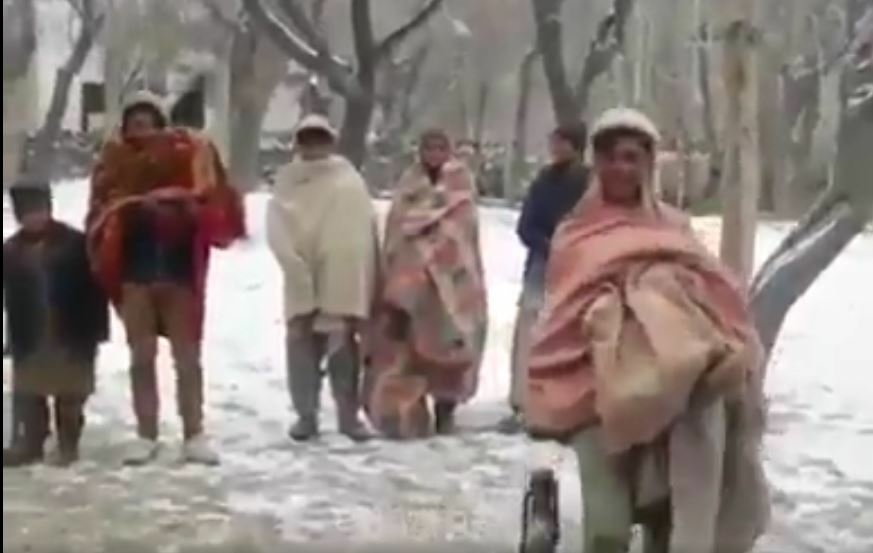 SRINAGAR:  A video of amateur catwalk by village urchins wearing traditional winter clothing is breaking the internet in Kashmir.

The 2.31-minute video was purportedly shot in Gilgit, Baltistan on the other side of Line of Control.

The video is being used by netizens to mock Bollywood actress Kangana Ranaut who is in the news for all wrong reasons. Kangana was part of 2008 Madhur Bhandarkar movie `Fashion’.

The ramp walk starts with a boy wearing a blanket and carrying a kerosene lantern to symbolize the power outages in winter. He is followed by a boy carrying a shovel symbolizing the snow clearance during winter. The highlight of the show was a kid wearing an oversized coat walking the ramp and posing like a pro. Some boys try to emulate skinny models to walk the ramp elegantly.

The video has been shared by multiple users on Facebook and Twitter. On one Facebook page, it has notched 30000 views in just two days. It has garnered 896 likes and 130 people have commented.

“Part 2 should be from our side of LOC. Pheran, Kangri, Muffler, Jagger, quilt, boiler, spade, a heater should be on display. Kid with a long overcoat and the one with a red piece of cloth really make this show amazing…” wrote one Facebook user.

A Twitter user while taking a potshot at a `Fashion’ actress asked people to identify Kangana (in the video).  “Identify Kangana RUNOUT”, he tweeted.

Kangana has been at the heart of the Twitter spat between Bollywood actors over farmers’ agitation. Kangana has hit out at American pop singer Rihanna, climate activist Greta Thunberg and Punjabi actor-singer Diljit Dosanjh for supporting farmers’ protest.

Another user called for tagging Kangana too in the video. “Tag Kangana also”, he said

Some users pointed out that traditional kangri and pheran, which are important tools for people to keep themselves warm, are missing. “In this winter fashion show Kandie d pheran is missing,” said another user.

Later, a user clarified that the video is from Gilgit where kangri culture is not in vogue. “They are kids from Khaplu, Gilgit-Baltistan. Video is by Gohar Balti,” tweeted Saif Ali.

Ready for amendment in farm laws, but that doesn’t imply shortcomings in legislations: Tomar in RS