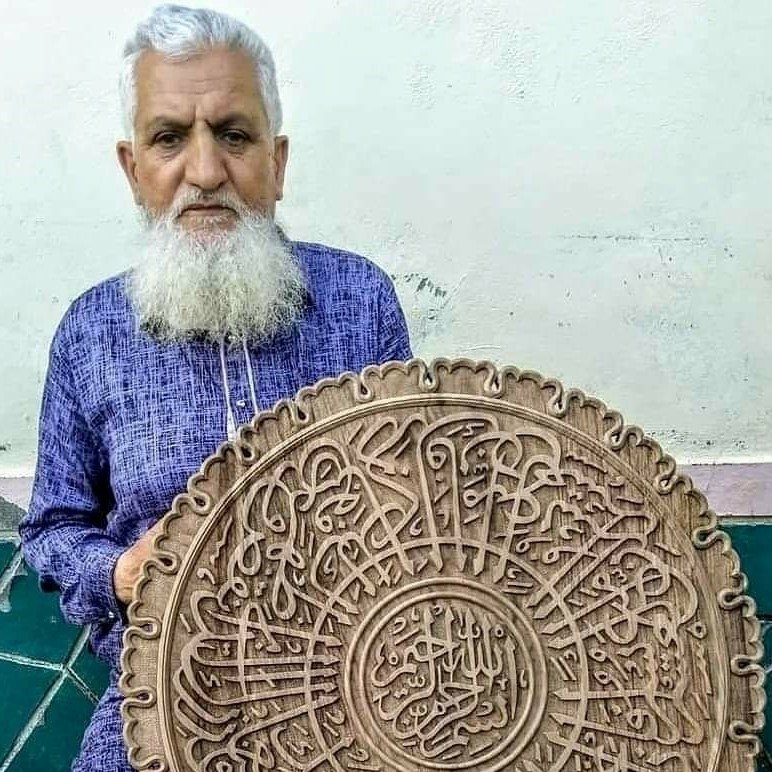 Srinagar: Days after The Kashmir Monitor reported about master-craftsman Jalaluddin Sheikh’s rare walnut-wood Quranic calligraphy, Jammu and Kashmir government has gone into overdrive and registered him as an accredited artisan and sought his nomination for the prestigious award.

Sheikh is now a registered artisan with the Handicrafts and Handloom department and the authorities have also sought his nomination for a prestigious award.

“After the surfacing of a photograph of his walnut-wood calligraphy work on social media and also your news report, we contacted him. He was not a registered artisan but we have now registered him with the department. We also sought an application from him for an award entry. We present awards in various categories and he qualifies for an award under the wood carving category,” Director, Handicrafts and Handloom, Kashmir, Mahmood Ahmad Shah told The Kashmir Monitor.

Sheikh, who is in his sixties and hails from Eidgah area of downtown Srinagar, had carved Surah Al-Inshirah (Alam Nashrah) on walnut wood.

The Director, Handicrafts and Handloom, Kashmir further said the award in wood carving category carried a cash prize of Rs. 50,000.

Welcoming the recognition of Sheikh’s work, Art Researcher Wiqar Bashir said walnut wood Quranic calligraphy was dying and finding masters of this art was not easy.

“It is heartening to note that the Department of Handicrafts and Handlooms has taken note of his rare work and also sought his nomination for an award. Craftsmen that can do Quranic calligraphy of this sort on walnut wood are rare to find. An artist has to be careful with ‘zer, zabar’ and other ‘harakat’. These works are priceless and are only made on request. Art lovers usually place a request for this sort of work after paying an advance. Walnut wood Quranic calligraphy is a dying art,” Wiqar told The Kashmir Monitor.

Earlier, Sheikh had stated that Quranic calligraphy on walnut wood required a lot of expertise.

“I have been doing this work for the past 40 years and thanks to Allah, there is a huge demand for walnut work. However, as far as walnut wood Quranic calligraphy is concerned, not all can do this. Carving an entire surah requires a lot of expertise and it is a ‘single-hand work’. A particular individual who makes it only knows how to go about it. And finding walnut wood of this size too is not easy. It took me a month to complete this and the diameter of this particular piece is around two and a half feet. Who else will do it? I have not seen any other craftsman doing this,” Sheikh had told The Kashmir Monitor.