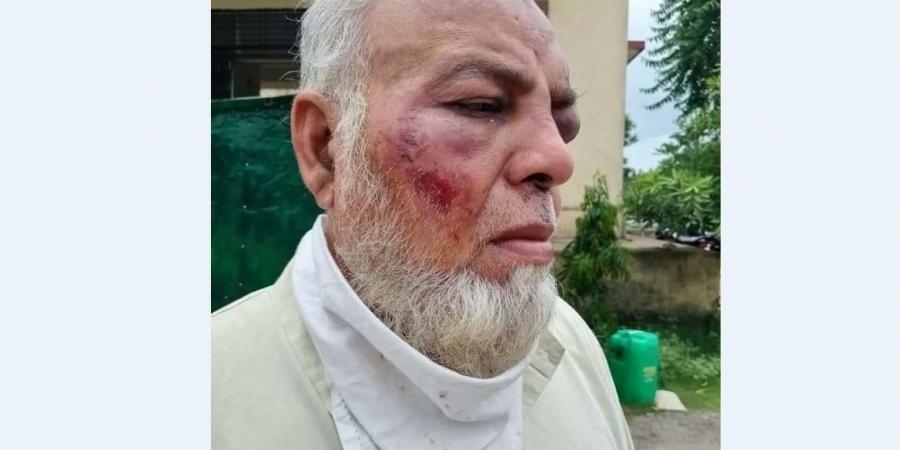 Jaipur In a horrific incident, a Muslim auto driver was brutally beaten by two persons and forced to chant “Jai Shri Ram” and “Modi Zindabad” in Rajasthan’s Sikar district earlier this week.

The culprits allegedly pulled the driver’s beard, punched him, knocked out his teeth, and asked him to go to Pakistan, reports said. The 52-year old Gaffar Ahmed was left with a swollen eye and bruises on his cheeks after the assault.

According to the victim, the shocking incident happened early in the morning when he was returning after dropping off some passengers at the railway station. Two men stopped him and forced him to chant “Jai Shree Ram” and brutally thrashed him. On the basis of the FIR registered by the victim, the Police have arrested two duo.

In the FIR, Gaffar Ahmed said that the men assaulted him when he refused to comply with their diktat. “I was coming back to Sikar after dropping off some passengers on the Friday afternoon. On the way near Jagmalpura, some men in a Bolero stopped me and asked for tobacco. When I gave it to them they said no and asked me to say a ‘Modi zindabad’. When I refused, I was slapped and asked to chant ‘Jai Shri Ram’. I just took my auto from there but they stopped me again and beat me up brutally. I lost 2-3 of my teeth. I sustained serious injuries on my left eye, cheek, and head as they assaulted me with a stick. After beating me up, they said they will rest only after sending me to Pakistan. I fell unconscious and came home after regaining consciousness,” Gaffar Ahmed stated in the FIR.

“After the FIR was lodged, we arrested Shambhudayal Jat, 35, and Rajendra Jat, 30. These men had parked their vehicle and were consuming alcohol when they stopped Gaffar, ” said Pushpendra Singh, station house officer, Sadar police station, Sikar.

“The Sadar police station arrested two accused for assault on the auto driver. No person should post provocative posts on social media, otherwise, legal action will be taken against them. Sikar police are always committed to protecting your interests”, tweeted Sikar police.