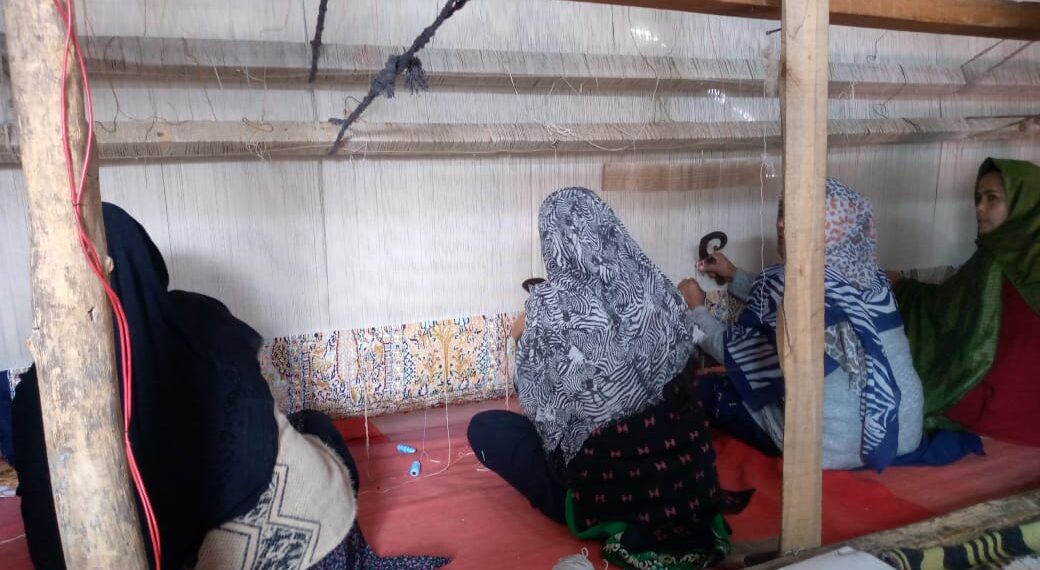 Srinagar: Mohammad Shafi Tinda’s family has been into Kashmir carpet weaving for over 200 years. The September 2014 deluge almost threw them out of business. The family incurred huge losses as all their carpets and raw material were washed away.,

A few years later, Shafi not only revived his business but took it to the next level by employing women and teaching the intricate pattern of hieroglyphs known as ‘taleem’ to the younger generation.

“The flood affected us badly and one 10 by 14 silk carpet that cost three lakh rupees also got damaged. I faced lots of problems but then I took a loan and restarted my unit which now employs eight ladies. Though I still have not fully cleared the loan, I am glad to have stuck to carpet weaving which we have been doing for generations. I started at a young age and have been into carpet weaving for the past 45 years even though my family has been doing this for over 200 years now,” Shafi told The Kashmir Monitor.

However, he regretted that his children were not interested in continuing with the family business even as he had passed on his skills to nearly two dozen people.

“I wish my kids continued this work as I have seen my father and grandfather weaving carpets. Unfortunately, they are not interested in carrying forward the legacy. I have taught the art of carpet weaving to nearly two dozen students and others want to learn this craft,” he said.

Known for his sophisticated Kashmir carpet designs, Mohammad Shafi Tinda’s unit has now been included in the Amdakadal edition of the Craft Safari. The safaris to different parts of the city were started last year after Srinagar made it to the coveted list of the United Nations Educational, Scientific & Cultural Organisation (UNESCO) in Crafts and Folk Arts Category for the year 2021. As part of the safari, the Handicrafts Department has identified several artisans and clusters in the old Srinagar city.

An official of the Handicrafts Department said Kashmir carpets woven at Shafi’s unit were full of ‘gorgeous patterns and vibrant colors and he was passing the craft to the new generation of weavers in Kashmir.

“Mohammad Shafi Tinda comes from a family that has been weaving carpets for the past 200 years and he continues the tradition. He creates sophisticated carpet designs that are full of gorgeous patterns and vibrant colors. The artist imbues every piece of artwork with a hypnotic pattern of hieroglyphs or a code known as ‘taleem’, which he then weaves into the individual colors and designs. In addition to this, he is now teaching his younger generation the craft, and he has already trained more than 20 people in its techniques,” the official said.